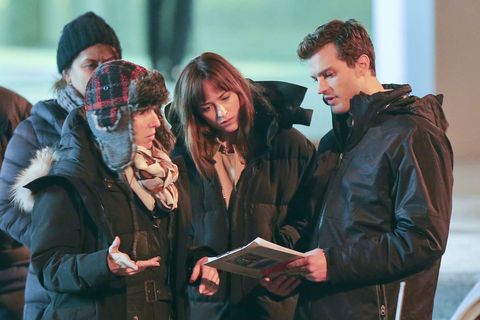 After one year and seven months of nonstop Fifty Shades, director Sam Taylor-Johnson's inner goddess could really use a break.

"I'm literally going out of my mind," says the lady who's responsible for living up to 100 million women's kinkiest expectations in Red magazine's March issue."I have seen this film over a thousand times and...the nuances within—the tiniest shift, look, blink of an eye—can make all the difference and flip it into the wrong territory. It's like walking a knife edge."

Like, this movie must be her magnum opus because she really, really needs to take some time off.

"I feel wrung dry, and I need to find some building bricks again. I don't think I could even compose a picture right now. My creative brain has to shut down for a second."

"I felt like I had a responsibility to empower the lead character," she says. "Anastasia had to go on a journey of sexual exploration but, by the end, it had to be about empowerment. It is all her choice. All decisions, she's clearly made. She is not falling prey."

'That's the message I want people to walk away with. That feeling of 'all the riches and success and charisma count for nothing, if it's under terms you cannot accept.' In Fifty Shades, seemingly Christian has all the power and control—but actually Anastasia does."

Watch the newest trailer below.

Fifty Shades of Grey: The Film Adaptation Gets a Director!