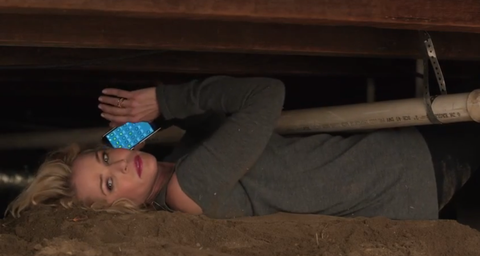 Our favorite part of the Super Bowl has nothing to do with guys tossing around an allegedly deflated football. Like 87.3% of the female population, we've always gravitated towards the halftime show and the commercial interludes as opposed to the game itself. And if the 2015 teasers are any indication, we'll be as disinterested in America's favorite pastime as ever thanks to a killer ad lineup that includes the Victoria's Secret Angels, Kim Kardashian, Mindy Kaling, and one very important cause. Here, find out what we're most excited for:

What happens when Handler and Silverman put their heads together? Brilliance, duh. It's hard to tell what's really going in this behind-the-scenes teaser for their new T-Mobile ad, but we love watching these ladies showcase the non carrier's wifi calling "without any grace, style, or class," as Handler puts it.

This parody of that famous Brady Bunch scene where Marcia Brady gets smacked in the face with a football is what commercial dreams are made of. Throwing Buscemi and Trejo into the mix is the cherry on top of the Super Bowl sundae.

Always will be the first feminine care brand to advertise during the Super Bowl AND is doing so on behalf of social change with their #LikeAGirl campaign, which seeks to change the perception of the phrase. Bravo!

February 1 will not go down as Super Bowl XLIX, but rather the official commencement of the #KimDataStash movement. The reality star has a self-deprecating message for the all poor souls who can't see her latest #OOTD, beauty look, or exotic vaca because their data plan is falling short: upgrade your plan, so you don't miss a single #selfie.

According to a report by TMZ, Lindsay Lohan was spotted filming a Super Bowl ad with the car insurance company. Since the rumors began, the irony has not been lost on us...or anyone.

Last week, we shared Mindy's first off-the-charts-cute teaser for Nationwide. It's birthed the hashtag #InvisibleMindy and we foresee it trending on the big night.

7. The Angels for Victoria's Secret

Candice Swanepoel, Lily Aldridge, Karlie Kloss, Behati Prinsloo, Alessandra Ambrosio, and Adriana Lima are suiting up and putting the guys' football uniforms to shame. Gisele Bündchen may not make an appearance in the ad, but it's still a reminder that even when the Patriots lose, Tom Brady wins.

The ad, which premiered on the Today show today, features a clip of Couric and Gumbel, two former co-hosts of the show, in 1994, talking about this thing called the internet and debating the meaning of the @ symbol. It then flashes to modern day, where the pair tries to decode the new electric BMW. See what they did there?

9. A Handsome Man and His Puppy for Budweiser

Much to our delight, there's plenty more "Puppy Love" to go around as far as the American lager giant is concerned. In this iteration, a handsome gentleman's best pup goes missing and he proceeds to post "Lost Dog" signs all over town. We all know how this ends.

Nobody puts 007 in the corner—except himself, maybe? Pierce Brosnan plays an aging action star whose idea of a car commercial involves exploding cabins, missile launchers, and driving on windy mountain roads at 200 miles per hour—the ad exec pitching him has different ideas.

If you were outraged with NFL commissioner Roger Goodell's actions, or lack thereof, concerning the highly-publicized cases of domestic abuse in his league, equal rights group UltraViolet is right there with you. Before the game on Super Bowl Sunday, their ad will flash the hashtag #GoodellMustGo to drive the point home.

For the first time ever, the NFL will run a TV spot DURING the Super Bowl that directly deals with domestic violence. The ad is based on an actual 911 call placed by a woman pretending to order pizza to escape her abuser. The league teamed up with No More, an organization that raises public awareness about domestic violence and sexual assault.

Lauren Valenti Associate Web Editor I’m the associate web editor at Marie Claire.
Advertisement - Continue Reading Below
More From Culture
Who Will Be on 'Bachelor in Paradise' in 2020?
When Will 'The Bachelor' Women Tell All Air?
Advertisement - Continue Reading Below
'The Bachelor' Has Already Finished His Season
The 83 Very Best Rom-Coms of All Time, Ranked
An Investigation Into the Next 'Bachelorette'
The Best Korean Dramas to Get You Hooked
Who Is 'Bachelor' Contestant Victoria Fuller?
Everything to Know About Peter Weber's Ex
Read an Excerpt From the Uber Whistleblower's Book
The Must-Watch TV Shows of 2020