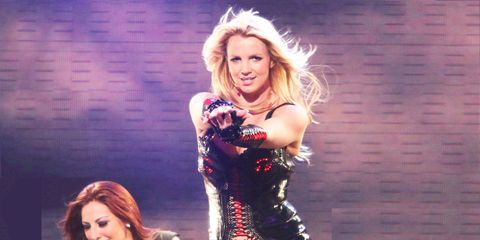 Britney Spears has been plenty busy recently, having performed nearly 100 shows in Las Vegas at Planet Hollywood, but rest assured her next album is on its way—though you may have to wait a bit.

In her new Billboard cover story, the singer gets candid about her priorities. Two things we learned: 1) New music is coming but 2) Family always comes first:

"I'm gonna do [a new album] slowly but surely," she explains. "There's a lot going on with my kids and schools and, you know, adding new sports and stuff like that. I'm gonna try to do my best to do an amazing album, but it's not my full priority right now. Kids can drive you crazy."

We certainly don't hold it against Brit. She's not only making bank—her Vegas shows have grossed over $42 million in ticket sales—but she has also committed to her residency through the end of 2015 and is in talks to extend it another two years through 2017. Can't knock the hustle...

"Right now we're just concentrating on putting out a few great singles as they come," explains Spears' manager Larry Rudolph. "We're not really talking seriously about a new album yet. Albums just aren't as important in the digital age as they used to be. Britney will get to one eventually, but not right now."

So, it sounds like we've got a lot of time to cool our heels and brace ourselves for another Britney masterpiece. In the meantime, at least we know there will be tracks to tide us over, like her forthcoming duet with Iggy Azalea, which is sure to be mah-jor.

The Best Britney Spears Moments Of All Time