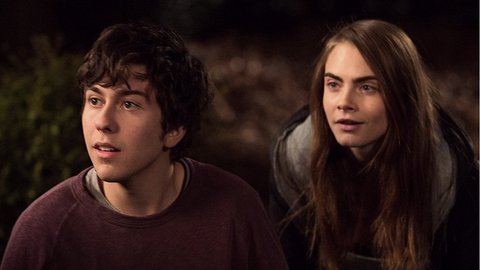 Cara Delevingne is getting ready for her big breakout role. Cast as lead charachter Margo Roth Spiegelman in Paper Towns, the Brit has released a 15-second clip to give us all a taste of what's to come. And bonus—they also just released the full trailer!

The movie, based on the John Green novel by the same name (yes, the man who brought the world the ugly-cry-inducing YA phenomenon The Fault in Our Stars), centers around Quentin Jacobsen (played by Nat Wolff) who discovers his neighbor Margo has disappeared. The catch? She may have left clues to find her.

It seems Delevingne is eager to show the world her acting chops—you'll be able to see her come March 27 in the Amanda Knox-inspired movie, The Face of an Angel, and she's also set to play a mermaid in the upcoming Pan.

A sneak peek for you. Watch the full #PaperTowns trailer tomorrow morning! @papertownsmovie

Here's an exclusive photo of @caradelevingne and me from @papertownsmovie. Full #PaperTowns trailer debuts tomorrow morning!

Cara Delevingne and Kendall Jenner Might Be Starting a Band

Samantha Leal Senior Web Editor I'm Sam, the senior editor at MarieClaire.com.
Advertisement - Continue Reading Below
More From Culture
Who Will Be on 'Bachelor in Paradise' in 2020?
When Will 'The Bachelor' Women Tell All Air?
Advertisement - Continue Reading Below
'The Bachelor' Has Already Finished His Season
The 83 Very Best Rom-Coms of All Time, Ranked
An Investigation Into the Next 'Bachelorette'
The Best Korean Dramas to Get You Hooked
Who Is 'Bachelor' Contestant Victoria Fuller?
Everything to Know About Peter Weber's Ex
Read an Excerpt From the Uber Whistleblower's Book
The Must-Watch TV Shows of 2020