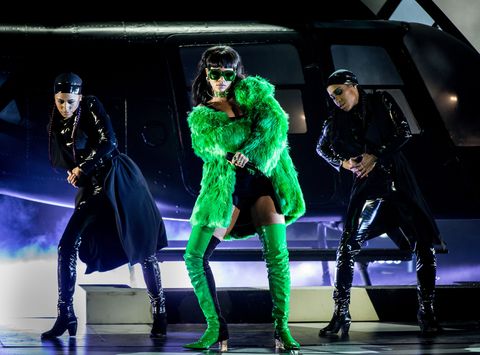 Update, 4/3: Uh-oh—Rihanna's facing allegations that she ripped off her smash single from an artist named Just Brittany. In 2014, the little-known rapper released a track called "Betta Have My Money," that, dare we say it, bares a striking resemblance to Rihanna's song. RiRi has yet to comment on the accusation. Listen to both tracks here:

Original post, 3/26: At long last, Rihanna has dropped a new single from her forthcoming album—her first in three years.

The single, entitled "BBHMM," is an acronym for B*tch Better Have My My Money, and is a reference to Keene Ivory Wayans' film I'm Gonna Get You Sucka. It may be an out-and-out, bottle-popping club anthem, but she's still made good on her promise of a new kind of sound.

"I've made a lot of songs that are just really, really big songs," she told MTV. "From the jump, they just blow up. And I wanted to kind of get back to—not that they weren't real music, but I just wanted to focus on things that felt real, that felt soulful, that felt forever." Rihanna also noted that the release will have a "timeless" vibe to it.

Yesterday, RiRi, being the tease that she is, shared a black and white portrait of herself on Instagram with the hashtags "#R8," and "#BBHMM," and most promisingly, "#March26," leading us and the rest of the internet hoping that by the end of today, she'll have dropped her entire album. Fingers crossed.

Rihanna Covers Madonna's 'Vogue,' Catwalks Will Never Be the Same

Why You Should Steal Rihanna's Slicked-Back Hairstyle

25 Times Rihanna Killed It on the Red Carpet
Lauren Valenti Associate Web Editor I’m the associate web editor at Marie Claire.
This content is created and maintained by a third party, and imported onto this page to help users provide their email addresses. You may be able to find more information about this and similar content at piano.io
Advertisement - Continue Reading Below
More From Culture
'The Great British Baking Show': Who Is Peter?
The Best Romantic Films of the Year (So Far)
Advertisement - Continue Reading Below
It's Time To Binge Hulu's Best Documentaries
When Will 'The Crown' Season 5 Be on Netflix?
'The Undoing' Season 2: Everything We Know
Cute Gift Ideas for Every Woman in Your Life
'The Undoing' Differs Sharply From the Book
'The Undoing' Is Packed With Stars
Differences Between 'The Undoing' Book and Novel
It's Been a Weird Year for 'The Bachelorette'