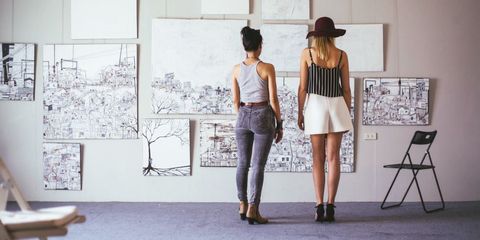 Confession: I don't really have a minimalist aesthetic. (Have you seen these?) I just have bare white walls because I'm not a girl but not yet the Catherine de Medici-like patroness I always knew I'd become.

For those of us between Audrey Hepburn posters and Alexander Calder mobiles (I wish), buying real, non-disposable art can seem intimidating and maybe a little bit hopeless if you've got MoMA taste on an IKEA budget. Don't despair—below, we've laid out everything you need to know to begin building a collection that might just earn you a museum wing someday. Or a placard—a placard's cool too.

First, there's that imaginary barbed wire surrounding the "art world," like, "Ooooh. Keep out if you don't own a mega yacht or aren't a Russian oligarch." Then, there's the self-imposed sense of inadequacy: What if I buy stupid stuff? What if my eye sucks?

Girl, relax. You don't have to have a Swiss bank account or a formal education to own some pieces of canvas stretched over some wood—you just have to know what you like. Flip through some books, brush up on your vocab, maybe subscribe to a magazine, but above all, know that you should only put money down on something you like, not because it's "a good investment" or might appreciate in price later. And in any case, better to be bad than boring, I always say.

Speaking of the internet...

There are loads of websites that sell quality, affordable art. From The Posters, you can get a Curtis Kulig or a trippy Simone Shubuck for $55 each, and ArtStar.com offers limited-edition, signed, and numbered prints range from $50 to $750. Plus, this way, if you're scared to set foot in a gallery because of that Bravo show, you don't have to talk to anyone!

Keep works on paper away from direct sunlight, and if it goes on a wall, it should be behind ultraviolet light-resistance glass on acid-free matting. As for when it comes to actually coughing up the money for a piece that speaks to you, don't be afraid to negotiate: lower shipping costs and paying in installments are pretty common deals.

Have fun with it

Maybe someday it'll be worth something, maybe it won't. The point is that you enjoyed it, which, by itself, is valuable enough.

These Photos Of Beyoncé, Jay Z and Blue Ivy As Art Are Everything

Where to Shop For Your Apartment *Besides* Ikea

You've Probably Seen This Guy's Forged Art in a Museum