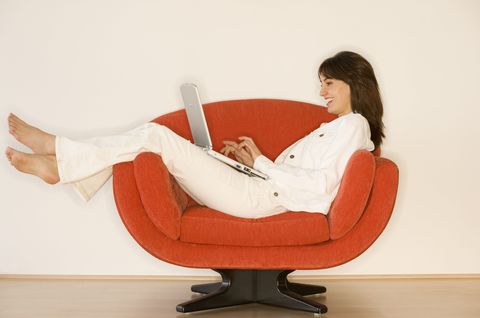 Like freaking clockwork, it's that time of year again when the inner pranksters of the world crawl out of hibernation and terrorize unsuspecting victims with childish antics resemblant of Ashton Kutcher's Punk'd days—yessss.

This is about the only day when it's actually appropriate to sit at your desk and annoy your cube mates with lame-ass jokes and watch can't-stop-laughing-omg videos at your computers. Right now, we're on our death beds cracking up at the ridiculousness only April Fools' Day can bring. God bless the Internet. And good sports.

In our defense, this was actually believable because the selfie stick is literally everywhere, and some genius* created the selfie brush. So obviously, the next step (ha) in selfie evolution was the "invention" of the selfie shoe:

"The great thing is about the selfie shoe is that you no longer need to use your arm, so now both hands are free to be in the photo." Valid.

Damn you, Aussies, for getting our hopes up. The Penguin Random House Company's Australian branch tweeted a fake cover of The Fault in Our Stars' author's upcoming project. Naturally, followers went ballistic until they discovered it was all a hoax—then all hell broke loose. Not really, but YA tweens are diehards for their favorite novels, so one can only imagine the worst.

FYI, Green has a great sense of humor:

My American publisher and several of my international publishers fell for @PenguinTeenAus's April Fools Day joke.

Guys I have some news... I'm straight

4. Kanye West Proved He Had a Soul

That lasted all of two seconds:

The baby isn't born yet, so there's still time for Beyoncé and Jay Z. Just sayin'.

We fail to see the hilarity of this—but goodbye, work! Hello, unemployment.

'Unbreakable Kimmy Schmidt' and the Rise of Invisible Humor

Kenny Thapoung Social Media Editor When I'm not stalking future-but-never-going-to-happen husbands on Facebook, you can catch me eating at one of NYC's B-rated or below dining establishments—A-rated restaurants are for basics.
Advertisement - Continue Reading Below
More From Culture
The Best New Music of 2020 (So Far)
Listen Up: Gripping New True Crime Podcasts
Advertisement - Continue Reading Below
'The Bachelor' Has Already Finished His Season
Unmissable Horror Movies Coming Out This Year
Who Is 'Bachelor' Peter's Mom Talking About?
Sarah Coffin Might Be a 'Bachelor' Frontrunner
Who Is 'Bachelor' Contestant Victoria Fuller?
Meet the Star of 'The Bachelor's ChampagneGate
Jurnee Smollett-Bell Is a Real Life Superhero
The Best Love Songs to Ever Exist