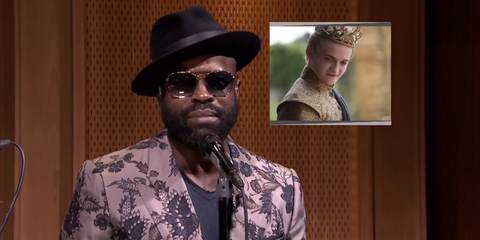 Last night on The Tonight Show with Jimmy Fallon, the band's resident wordsmith Tariq "Black Thought" Trotter masterfully recapped Game of Thrones seasons 1-4 in a 1-minute rap so infectious we're already memorizing the lyrics. And trust, what it lacks in length, it makes up for in deft rhymes that cover all of the show's most pivotal plot lines including King Joffrey's death, Bran's premonitions, Sansa skipping town, Tyrion's misfortune, and those naughty dragons. At the end, Trotter hits the show's overarching theme on the head rapping, "It's nothin' but drama, it's nothin' but drama yeah."

Ahead of Game of Thrones' return on April 12, let these guys get you up to speed in smooth fashion, below:

Kit Harington Wants Us to Stop Talking About His Sex Appeal

Lauren Valenti Associate Web Editor I’m the associate web editor at Marie Claire.
Advertisement - Continue Reading Below
More From Culture
You Can Now Take a 'Love Is Blind' Vacation
The Best New Music of 2020 (So Far)
Advertisement - Continue Reading Below
Will Hannah Ann Sluss Be the Next 'Bachelorette'?
The 13 Sexiest Movies on Netlfix
'The Bachelor' Has Already Finished His Season
An Investigation Into the Next 'Bachelorette'
This Amazon Reality Show Is a Fashion Girl's Dream
The 25 Sexiest Music Videos of All Time
Who Is 'Bachelor' Contestant Victoria Fuller?
Does 'Bachelor's Madison Prewett Self-Eliminate?