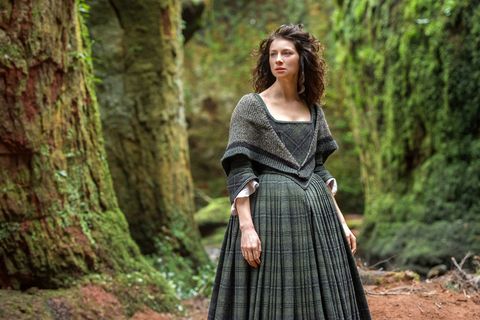 Saturday night marks the mid-season return of the genre-bending fan-favorite cultural phenomenon that is Outlander. We (big fans) sat down with its star to get the inside scoop.

Outlander's been dubbed a "bodice ripper," but it's really a show about a badass feminist heroine–and if there is any bodice ripping it's on Claire's terms. Do you think "bodice ripper" is a misnomer?

"I think that doesn't justify the show. I think we bring so much more to it. Claire is a very sexual woman and she's very in control of her sexuality and she doesn't apologize for it. I think that's something that's great about her. I mean, we don't very often get these female characters who are able to bring that to a show. Usually it's more common to see the male protagonist, and they have as many women as they want or there's something going on in the background as two people are having a conversation. But also, there is an element of sexual violence being used as a weapon in that time, and I think we can't take away from the seriousness of that."

Claire wrapped up the middle of the season being sexually assaulted by two different men in the course of one episode. How will she cope with that, and will the assault impact her sexual and emotional relationship with Jamie?

"I think that her emotional relationship with Jamie is sort of a safe haven for her, and it's where she can go and really feel safe and heal. They've built this partnership. And it's vice versa––I think he's going to experience some really harrowing things this season and she's going to be the one that's going to be there for him. I think yes, these incidences, they do have an effect on her psyche. But that's kind of the amazing thing, that you do see how resilient she is. It's incredible how much one person can withstand, but she manages to forge forward."

One of the reasons we love Outlander is because it gives the romance genre an unexpected feminist spin. Is it exciting to be part of a show where the heroine doesn't always have to rely on a hero to save her?

"Very much so, and especially in the second half of the season you're going to see that idea really turned on its head. Claire and Jamie's sister, Jenny, they become in some way the rescuers. It's great that there's a conversation about this new wave of feminism happening at the moment as well, which I think is fantastic. And it feels like on TV right now there is such a wealth of great female characters, and I think we have to keep forging forward with that as well."

"I think the perfect feminist role is to be a complicated, messy woman, and that means you're not always strong."

Outlander's gotten a lot of attention for its steamy sex scenes, but they seem to serve a bigger purpose. Do you think sex is a way for Claire to assert herself and reclaim some of the agency that's been taken from her?

"I don't know if its necessarily a way for her to do that, but I think it's just such an integral part of her person. I think that as passionate as she is in her sexuality, she's as passionate in her need to heal people and her capacity for empathy. She just is someone who lives very fully. And that's something I loved about her character. She doesn't apologize for her sexuality at all, and it's an amazing thing to watch. But that's why she feels very timeless to me, because I think even for the '40s that's quite forward-thinking. She just feels like a very elemental person to me, and I think it's a fun side of her character to play."

No marriage is perfect, no matter how great the sex. Will Jamie and Claire clash when it comes to the traditional roles of husband and wife now that they're married?

"Very much so, yeah. I think Claire always has this idea that she wants to settle down and have a home, and almost play the traditional wife role, but it's really not in her DNA. I think in the 40s when this idea that Frank was going to go to Oxford and be a professor and she was going to be a professor's wife, I think that would have worked out really badly for her had circumstances not intervened. And again, when we see on the second half of the season Jamie's desire to go back to Lallybroch and have Claire be the Lady of Lallybroch, I think that fills her with a lot of trepidation because that's not who she is. She has to really struggle with that, and struggle with what this idea of home is to her, and what would her role be. And how can she marry this desire to on one hand have a family, and also this need to be an active and useful person."

Do you feel any pressure surrounding Claire's role as a feminist heroine, or worry fans could be upset if she doesn't make the perfect feminist decision?

"I don't know what the perfect feminist role is––I think the perfect feminist role is to be a complicated, messy woman, and that means you're not always strong. Weakness is in all of us, and I think to be able to allow yourself to be vulnerable and allow yourself to be weak is a strong character too, in a way. She's not perfect and she can't be put on a pedestal and be anyone's perfect hero––or heroine. I think that's why people gravitate to her. In her complications and in her messiness, that's something people can relate to."

Watch Caitriona on Outlander this Saturday at 9 p.m. EST on Starz.

Jenny Slate Is Working on Her Own TV Show, All Is Right with the World

Mehera Bonner Contributor Mehera Bonner is a news writer who focuses on celebrities and royals—follow her on Instagram.
This content is created and maintained by a third party, and imported onto this page to help users provide their email addresses. You may be able to find more information about this and similar content at piano.io
Advertisement - Continue Reading Below
More From Culture
Did Princess Diana Really Dance to 'Uptown Girl'?
'Bachelorette' Frontrunner Brendan Is an Actor
Advertisement - Continue Reading Below
Everything We Know About Matt James
Zac Clark Could Be a 'Bach' Frontrunner
It's Been a Weird Year for 'The Bachelorette'
Who Is Noel Fielding's Partner, Lliana Bird?
We Can't Get Enough of These Jennifer Lopez Films
28 Movies With Super-Romantic Sex Scenes
Was Princess Di in Love With Her Bodyguard?
40 Things You Probably Didn't Know About 'Glee'