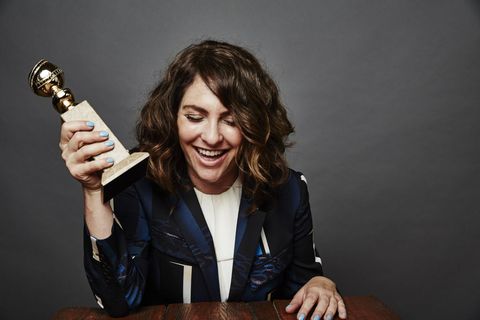 The comedy (written by Ashley Skidmore and Lyle Friedman, veterans of the famed improve group Upright Citizens Brigade) sounds just as fresh and original as you'd expect from Soloway, and focuses on two second-wave feminist friends who meet at summer camp. After getting struck by lightning in the forest, they realize that the fate of womankind hangs in the balance of their friendship. Flash forward 10 years and they're on a mission to save the female species.

"Lyle and Ashley have a magical ability to tap into the female psyche, and through their own special brand of truth and humor they absolve us of our most humiliating moments," Soloway told The Hollywood Reporter. "I'm so excited to godmother this show and bring Lyle and Ashley's fresh take on lady power to MTV."

Feminism is enjoying a huge surge of popularity in both Hollywood and the media right now, and while it gets good lip service through shows like HBO's Girls and Comedy Central's Broad City, MTV's new comedy will reach a younger audience who may not be familiar with feminism—let alone the concept of "second-wave feminism." Hell, maybe even Disney will hop on the bandwagon next. The Feminists of Waverly Place, anyone?

For a sneak peek at the humor you can expect from MTV's new half-hour scripted series, check out Ashley Skidmore and Lyle Friedman's webseries #HotMessMoves. But don't blame us when you get no work done today.

These Will Be the Big Feminist Issues of 2015

Everything That's New on Netflix This Month