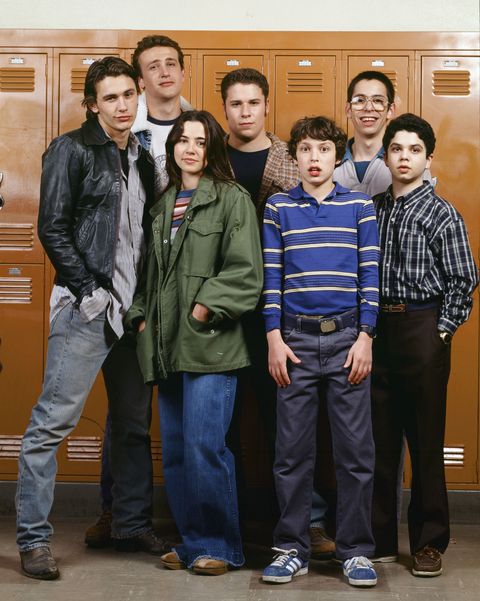 Did you binge-watch the way-too-short run of Freaks and Geeks, and wish desperately you could watch more? Sadly, it's unlikely there will be a reboot anytime soon, but the next best thing is about to happen.

Entertainment Weekly reports that the cast of the gone-too-soon show will reunite at the TV Land Awards on Saturday, April 18. They'll be attending to receive the 15th Anniversary Award, since it's been (yup) 15 years since the show aired its only season.

Creator Paul Feig and producer Judd Apatow will be there, and so will Seth Rogen, Jason Segel, Linda Cardellini, Busy Phillips, Samm Levine, Martin Starr, David Gruber Allen, and Steve Bannos. It's unclear if they'll do anything but graciously accept the prize, but here's hoping they'll show up in their best late-90s chic. Flannel and stonewashed jeans, anyone?

The main question is this: Where's James Franco on this list? Sure, he's probably writing seven novels, going to law school and medical school simultaneously, and starring in a movie or two, but he surely has time to meet up with the old gang, right?

The Absolute Best TV Shows from the Early 2000s

7 Signs You're in a Serious Relationship With Netflix

Jenny Slate Is Working on Her Own TV Show, All Is Right with the World