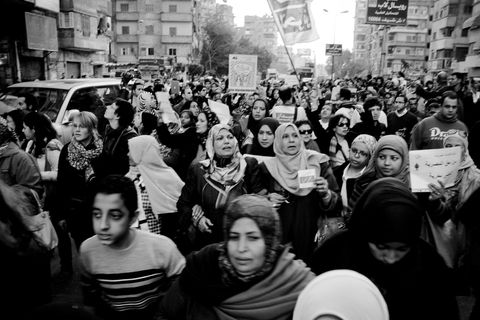 Abigail Disney may be Walt Disney's grandniece, and they both may be driving forces behind movies, but that's generally where the similarities end. Abigail focuses on documentaries, which have very little in common with her famous relative's fairytales. Yes, before turning her attention to movie-making, Abigail Disney worked in the non-profit sector for years, and her passion for social justice is evident in her films. The first one she produced, Pray the Devil Back to Hell, told the story of the Women of Liberia Mass Action for Peace movement and won best documentary at Tribeca Film Festival 2008. (NBD.)

Earlier this month, Disney sat down with Marie Claire Editor in Chief Anne Fulenwider for a Women Moving Millions and Gucci event at Hearst Tower on the power of storytelling through film to talk about one of her newest films, Trials of Spring. The documentary follows five remarkable women in the Middle East and North Africa who participated in the Arab Spring uprisings, a series of antigovernment uprisings beginning in 2010. The triumph they experienced witnessing the fall of repressive regimes across the region didn't last: women who were visible in public life increasingly started to become targets of sexual and physical violence.

"A lot of people have said to us, including some funders, 'Can you make it a little more upbeat?'" Disney said. "And you can't. You've got to follow the story."

Disney also discussed some of the differences between American and Egyptians audiences. "What we want from Americans is awareness and compassion, because we are really starting from zero in America," she explained. "They don't really know what's going on."

"In Egypt, it is partly about shaming some of the men. I don't know what happened [at Tahrir Square], but there was a monster in that square," she added. And for both countries? "I really want us to talk about the nature of militarism," Disney said. "There's an inherent relationship between militarism and misogyny. There just is."

The film is slated to be broadcast in 2016, and not only that—six short subject films by Disney that follow women in six different countries across the region got picked up The New York Times foreign desk to be distributed on their website.

Keep your eyes out. You won't want to miss these.Watch the trailer below:

Egyptians Fight Back Against Sexual Harassment

Report: Ryan Gosling Is Set to Star in a Live-Action Disney Film

Disney Princesses Are Their Own Heroes in This Empowering Photo Series