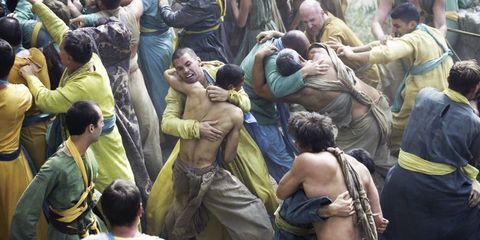 1. Pigeons are *so* underrated.

What Happened: After giving up on entering Braavos' House of Black and White, Arya took to the street in search of food. Before getting rescued by Jaqen H'ghar and his blonde highlights from a trove of angry bros, she settles for a pigeon.

The Lesson: Pigeon is a seriously underestimated lunch-time snack. If you're go gonna for it, follow Arya's lead: stand as still as possible and, with a flick of the wrist, lob off its head with your mini sword. Easy peasy.

2. If no one wants your help, do it anyway—even if it almost gets you cut in half.

What Happened: Brienne of Tarth, who's sworn her life to protect the Stark girls, finally met Sansa Stark—and then got rejected by Sansa Stark. And then Littlefinger's knight gang pulled out their swords to attack.

The Lesson: The person who needs your help most probably doesn't care if you die. Also, that person is probably a naive teenager—who, by the way, you just outed when she's clearly undercover (see: dye job)—brainwashed by a former pimp who may or may not be creeping on her and has 10 sword-wielding bodyguards. Sure, help her anyway.

3. Beheadings are definitely the way to get people to like you.

What Happened: While a member of the Sons of the Harpy was awaiting a fair trial, a former slave assassinated him. (The dude is trying to bring back slavery, can you blame him?!) Sticking to her moral code, Queen Daenerys Targaryen has the perpetrator publicly beheaded. Which pisses off everyone in Meereen (they hiss!) and starts a riot.

The Lesson: The opinion of the public means nothing; trust your instincts. Tread carefully if these instincts are telling you, "Off with his head!" Oh yeah, and bring an army of castrated soldiers to ward off the haters.

4. When someone's trying to save your life, go ahead and totally ignore them.

What Happened: While on vacation with Littlefinger, Sansa is offered lifelong protection by her mother's old bodyguard Brienne. Sansa responds with something like, "Ugh, no, let me just enjoy my horrible fate with my creepy uncle."

The Lesson: When life gives you lemons, don't let anyone else make the lemonade for you. In Sansa's case, this sticking it out with her pimp uncle and denying the aid of Westeros' most fearsome knight. Sometimes, you gotta learn the hard way.

5. If your fiancé's family wants you dead, skip around in a park and act like nothing's wrong.

What Happened: After the Mountain killed Oberyn Martell, Ellaria Sand, the prince of Dorne's former lover vows to avenge his death. This may or may not include cutting off the fingers of Trystane Martell's bride-to-be, Myrcella Lannister, and sending them to her mother Cersei Lannister as the Worst Edible Arrangement Ever. In face of danger, Myrcella wanders around in the garden and flirts with her fiancé like it ain't no thang.

The Lesson: Ignore a problem and it'll definitely go away. Works every time.

What Happened: Fearing that her daughter Myrcella is in danger, Cersei informs Jaime Lannister that he's a bad father. Even though, you know, he can't actually acknowledge his kids because they're twinsies and that would get them all killed. In response, Jaime initiates a rescue mission to Dorne that could end in a war if he's caught. Logic!

The Lesson: Always tell it like it is. If your man (who also happens to be your twin-bro) isn't taking fatherhood seriously, let that fool know, and watch him whip back into shape.

7. If everything in your life sucks, get a haircut.

What Happened: Following the death of her lover Oberyn, Ellaria returned to Dorne. In the midst of plotting an epic revenge, she cut her luscious locks into a cute little bob.

The Lesson: When nothing seems to be going your way (like your BF's head gets squished like a grape), sometimes a change of pace is needed: Get a sweet haircut, you'll feel better!

8. If someone grew up in a forest, don't teach that heathen how to read.

The Lesson: A person who grows up in the woods with a bunch of illiterate savages should never experience the wonders of books. It's just not right. Lady Selyse is the most sane person on this show since Aunt Lisa, so listen up.