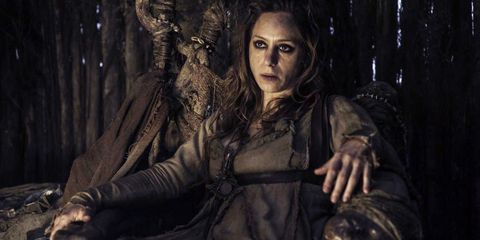 1. Sure, go on vacation with your super creepy uncle.

What Happened: Sansa rode off into the west with Petyr Baelish, AKA Littlefinger.

The Lesson: By all means, travel alone with your creepy uncle–if that creepy uncle is saving your life. It might not be the best scenario (come on, Littlefinger is a Grade-A creeper), but it's way better than dealing with haters like Cersei.

What Happened: A young Cersei Lannister broke into a witch's home and demanded to have her fortune told.

3. If a psychic asks to suck blood from your finger, she's the real deal.

What Happened: Maggy the Frog accurately predicted Cersei's above horrible future by sucking blood out of her finger.

The Lesson: Tarot cards are so last year. Next time you try to tell someone's fortune, drink their blood. Who cares about blood-born pathogens? They probably didn't even exist back then!

4. The penguin kiss keeps your man coming back (especially handy at funerals).

The Lesson: Like a gentle way of blue-balling your man, a simple rub of the noses is a very intimate form of affection—and temptation. So far, it seems to working for Margaery; young Tommen is officially whipped.

What Happened: Daenerys Targaryen spent some quality time gazing at Daario Naharis's sculpted butt, and then listened to him weigh in on her latest decisions as queen.

The Lesson: In Dany's case, Daario is onto something: open the fighting pits, win the respect of the people, and then, oh yeah, LEARN TO TRAIN YOUR FREAKIN' DRAGONS. Ain't no better way to rule than with fire-breathing beasts at your side.

6. Avoid any, uh, below-the-belt questions if he doesn't have, you know, anything below the belt.

What Happened: Basically, Missandei barged into the men's locker room to ask Grey Worm a very pressing question along the lines of: "Why are your Unsullied friends chilling out at the brothels when y'all don't have dicks?" Afterwards, Grey Worm ran off flustered and embarrassed.

The Lesson: The penis can be a sensitive topic. Asking a dude about his size one thing, but things get especially tricky when the question revolves around a lack of "pillar and stones."

What Happened: Brienne of Tarth got sick of babysitting her doting squire Sir Podrick Payne. After trekking hundreds of miles together, Pod was looking to tag along for a few more, but then Bri told him to get lost.

The Lesson: Sometimes—and especially when searching for meaning and justice in the cruel world of Westeros—having a man weigh you down just isn't gonna cut it.

What Happened: Melisandre, the Red Priestess, flirted with Jon Snow in the most direct way possible. It went like this:

Melisandre: "Are you a virgin?"

The Lesson: If you just wanna bone, go for experienced guys. Melisandre's definitely looking to have another demon shadow baby, and Jon Snow seems to be a prime candidate. Best of all, thanks to Jon's tryst with Ygritte, she doesn't have to waste time breaking him in.

9. Call him out on promises he can't keep.

What Happened: Gilly, now a guest of Castle Black, is getting the sense that she's not wanted around. Her sort-of boyfriend Samwell Tarly says not to worry—he's going wherever she goes. But then Gilly reminds him that they kill deserters of the Wall.

The Lesson: Put that crow in his place. When the White Walkers are lurking, like, juuuust over there, maybe now's not the time to just follow your heart.

You, Lowly Non-HBO-Haver, Can Now Watch HBO for Free