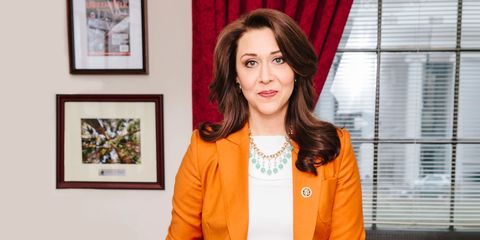 In her first month of serving in Congress four years ago, Jaime Herrera Beutler faced a test, one the Republican from Washington state remembers vividly. Right on the House floor, the chairman of an important committee (she won't say who) strode toward her with a bill and a list of other freshmen who had signed on as sponsors, and said, "Here, sign this."

"I said, 'Do you have a copy of the bill? Could I look at it?'" recalls the self-described conservative, who, at 36, is among some of the youngest members of Congress. "He looked at me and said, 'I don't have a copy. Just sign.'" Though she'd only served a month—still early enough to cement a reputation within her party that could haunt her for the duration of her tenure—she told him she wouldn't sign until she'd had a chance to read the bill. The payoff was not immediate. "I thought, Oh, great. I've been here a month, and I'm winning friends and influencing people. But you know what? He never pushed me again. In this town," she explains, "you have to set your boundaries early on."

That kind of dauntlessness has been a hallmark of Herrera Beutler's career. The daughter of a second-generation Mexican-American father, she and her five siblings (three of whom were adopted) were homeschooled by their mother. At just 29, the University of Washington communications major was tapped to fill a spot in Washington state's House of Representatives when her predecessor was ousted in a sex scandal. But the appointment was in no way a handout. Herrera Beutler, who'd been working on Capitol Hill as an aide for U.S. Rep. Cathy McMorris Rodgers (Washington state's only congresswoman at the time), had to persuade the local party leaders—"not the muckety-mucks, the grassroots," she explains—to support her in a field of roughly a dozen entrants, a feat she ascribes to the decidedly no-frills act of cold-calling. Her secret: She never took no for an answer. Instead, she'd say, "If that person you committed your support to doesn't make it through the first round of voting, will you vote for me in the second?"

Less than two years later, she ran for Congress. Her congressional races have been hard fought, but Herrera Beutler's toughest challenge wasn't political, it was personal. In 2013, pregnant with her first child, she learned that the baby had Potter's syndrome—the child's kidneys were not properly developing, causing low amniotic fluid, which, in turn, inhibited the growth of the lungs. The condition is almost always fatal. Even in this, Herrera Beutler refused to take no for an answer. "I just had to decide that this baby is going to be a miracle," Herrera Beutler says. "I'm sure it confused people, because they'd come up and say, 'I'm so sorry for your loss,' and I would be like, 'Thank you, but I believe she's going to be OK.' "

"I love being a young Hispanic mother who's a Republican, because it breaks through a lot of stereotypes."

Once Herrera Beutler went public with the news of her pregnancy, she heard from a father whose child, suffering from low amniotic fluid, had received experimental but lifesaving injections of saline to the amniotic sac. Herrera Beutler found a doctor at Johns Hopkins Medicine who was willing to give her the injections, and in July 2013, her daughter, Abigail (named for first lady Abigail Adams), was born, 12 weeks premature and weighing less than 3 pounds. She is believed to be the first baby to have survived being born without either of her kidneys. Abigail still needs a kidney transplant, which she will likely receive from her father. "She's thriving," Herrera Beutler says.

The ordeal has already influenced her legislative agenda. Last year, she championed a bill that would make it easier for children on Medicaid with complex medical conditions to get treatment across state lines. "I probably would have supported it before," she says, "but I wouldn't be the one who's selling it." (The bill is awaiting a vote in both the House and Senate.)

Though decidedly conservative—she is pro-life and voted to repeal Obamacare—Herrera Beutler says she has little patience for party extremists. "I wouldn't call myself a moderate, but I would call myself an adult," she says. By way of example, she points to her friendship with Suzanne Bonamici, the Oregon Democrat whose district includes famously liberal Portland. "We ride the same plane," Herrera Beutler says. "We don't agree on everything policy-wise, but there are things we do agree on, and that allows us to collaborate."

She adds: "I love being a young Hispanic mother who's a Republican, because it breaks through a lot of stereotypes." And in a party that's thin on female iconoclasts, it's no surprise that party pooh-bahs are keeping their eyes on her. "I haven't made decisions as to the future," she says, "but it is wide open and full of opportunities, and I plan to do the best I can with them."

On the Anniversary of Roe v. Wade, a Look at Where Abortion Politics Stand Now

SMH: A Female CEO Is Saying Women Can't Be President

This content is created and maintained by a third party, and imported onto this page to help users provide their email addresses. You may be able to find more information about this and similar content at piano.io
Advertisement - Continue Reading Below
More From Culture
The Cast of Grand Army Are BFFs IRL
A Look Back at Princess Anne's Life in Photos
Advertisement - Continue Reading Below
Who's in 'The Queen's Gambit'?
'After We Collided' Stars Play Trivia With Us
'The Crown' Season 4 Is Coming So Soon
It's Been a Weird Year for 'The Bachelorette'
Who Plays Townes in 'The Queen's Gambit'?
The Best Korean Dramas to Get You Hooked
To Save Victims, We Must Dismantle Purity Culture
Will There Be a Season 2 of 'The Queen's Gambit'?