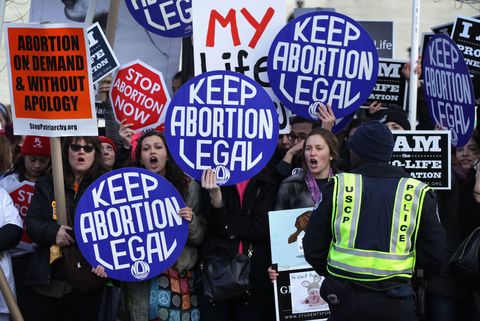 No matter where your beliefs fall on the political spectrum, today is a pretty big-deal day for women. Why? Because it's the 42nd anniversary of the passage of Roe v. Wade—a law that gave women control over their bodies and the right to make a decision that's never easy to make.

Forty-two years later, the fight isn't over, especially when it comes to individual states (and male lawmakers, for that matter) respecting and representing women's rights.

The situation in the South continues to be scary: Doctors who perform abortions—a legal service—are murdered while sitting in church pews. Several states have shuttered legitimate clinics so that women don't have access to reproductive healthcare. Over the last four years alone, states have passed 231 new laws restricting a woman's right to have an abortion.

Just yesterday House Republicans were supposed to vote on a bill to ban abortions after 20 weeks (but then someone must have realized it might be a little gauche to take back the freedom for women to control their own bodies on the anniversary of the day that gave women the freedom to control their own bodies). Then today, a bill was passed that bans the use of federal tax dollars to cover abortions—leaving fewer options for women with Medicare, restricting a woman's ability to buy a private plan that includes abortion coverage, and denying small businesses the tax credit they currently receive through the Affordable Care Act.

Abortion is one of the most polarizing issues of our time. But it's one that touches one in every three women over the course of her life. As we move toward the 43rd anniversary, we hope those women are part of the conversation too.

Nicki Minaj Opens Up About Having an Abortion

Elizabeth Kiefer Elizabeth Kiefer is a features editor at Cosmopolitan, where she focuses on enterprise stories, narrative reporting, and cultural coverage for the magazine's print and digital platforms.
This content is created and maintained by a third party, and imported onto this page to help users provide their email addresses. You may be able to find more information about this and similar content at piano.io
Advertisement - Continue Reading Below
More From Politics
What Liberation Means This Juneteenth
Kathryn Garcia: It's Time to Step Up or Shut Up
Advertisement - Continue Reading Below
A Valedictorian Speaks Out Against Abortion Bans
Standing Between Care and Violence
Seeking Healing a Century After the Tulsa Massacre
What to Know about Texas's Abortion "Trigger Ban"
A New Book Invites Us to Rethink Menstrual Equity
We Must Remember George Floyd's Legacy
This Is How Much Joe Biden Is Worth
Joe Biden's Granddaughter Is His Biggest Fan