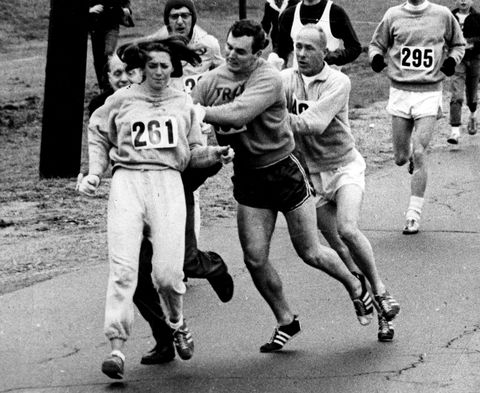 For all the strides we're making in the fight for women's rights, looking back at the old-fashioned reasoning against females participating/competing/doing things men do is kind of like looking back at a joke book—these can't be real, right?

Here, some of the most ridiculous "reasons" men have whipped out in order to keep women from doing, well, just about anything.

We couldn't run marathons because our uteri are at risk of falling out.

Your "Uh, What?" factoid of the day: Women weren't allowed to participate in long-distance running by the Amateur Athletic Union (AAU) until 1972 because it was thought that the strain of the running would cause women's uteri to fall out, or that they would grow to become muscle-bound and sprout hair on their chests. (??) Katherine Switzer, pictured above, said to hell with that and joined the Boston Marathon, undetected, in 1967. But when a caretaker of the marathon was notified that there was a woman running, things took a turn—he was snapped trying to grab her numbered bib as he yelled, "Get the hell out of my race and give me that number." She still finished, like a badass, in 4:20 with the help of other racers' protection, and the pic has gone down in history.

We couldn't vote because we would just annul our husbands' votes.

A pamphlet published in the 1910s explained why women shouldn't vote using these "facts": 90% of women did not want to vote, 80% of women who are eligible to vote were married and would just annul their husband's votes or double their husband's votes (what...kind…of…logic…?), and it "is unwise to risk the good we already have for the evil which may occur." Perhaps the best part is that the pamphlet also contained cleaning tips for women, including this gem: "You do not need a ballot to clean out your sink spout." Noted.

We couldn't ski jump because then we couldn't have babies.

While the Olympic games has had ski jumping for men since 1924, but the sport only opened to female competitors in 2011, in time for the 2014 games. Different reasons were given, but the most recent(and often quoted) opposition came in 2005, when the President of the International Ski Federation Gian Franco Kasper said he opposed women's ski jumping because it "seems not to be appropriate for ladies from a medical point of view." Others echoed his sentiments, and when pushed for clarification, it was put more bluntly: women's reproductive organs could be damaged from the impact of landings. BYE, UTERUS. (P.S. That's not true.)

We can't engage in military combat because we have emotions.

In 2013, the U.S. military officially lifted a ban on female soldiers serving in combat roles. One denouncer? Rick Santorum, who said that he didn't think women should be allowed in combat because of the "types of emotions that are involved." He also stated that women are bad for combat because there are certain physical limitations. "You may be out there on a mission where there's you and a woman, and if you're injured the ability to be able to transport that person back. There's just, there are physical limitations." (He obviously forgot the fact that everyone who fights for this country is vetted and held to the same physical standards.)

We couldn't do much of anything because our smaller brains made us stupider.

Lest we forget: Paul Broca—noted French physician and anatomist who helped to map the brain (he has a region of the frontal lobe named after him), a man whose logic and calculations were sound and who helped pave our understanding of how the brain works— even *he* got it wrong. He claimed that women have smaller brains, and inferred that it's because they did not need to do as much as men and that they were inferior to males. "But we must not forget that woman are, on the average, a little less intelligent than men, a difference which we should not exaggerate but which is, nonetheless, real. We are therefore permitted to suppose that the relatively small size of the female brain depends in part upon her physical inferiority and in part upon her intellectual inferiority." To give you a bit of clarity—this was only 154 years ago, a very small blip on the human timeline. Ahem.

The 10 Biggest Supporters of Women's Rights in U.S. Government

In Cool Findings of the Day: Feminist Countries Have Higher Fertility Rates