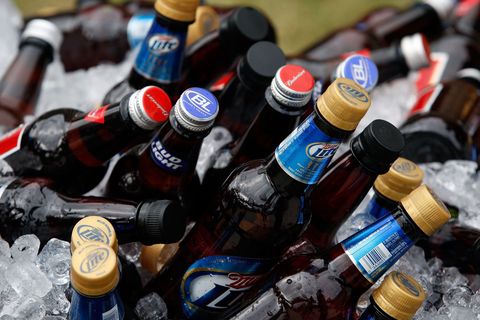 Talk about a marketing #fail on all levels—Budweiser has come under fire for a recent tagline that some say promotes rape culture. The line, "The perfect beer for removing 'no' from your vocabulary," was placed on Bud Light bottles as part of its "Up for Whatever" campaign.

Thankfully, after hearing from critics via social media, Budweiser will not print the line on any more bottles. "The Bud Light Up for Whatever campaign, now in its second year, has inspired millions of consumers to engage with our brand in a positive and light-hearted way," Alexander Lambrecht, vice president of Anheuser-Busch's Bud Light division, said in an e-mailed statement to Bloomberg Business. "In this spirit, we created more than 140 different scroll messages intended to encourage spontaneous fun. It's clear that this message missed the mark, and we regret it."

Missed the mark could be the understatement of the year. In any case, this isn't the first (nor unfortunately probably not the last) time companies have completely "missed the mark" when it came to advertising—in fact, it seems to happen quite often. A Brazilian beer company yanked Carnaval beer ads after their slogan created a social media frenzy. The line was eerily similar to Budweiser's: "Esqueci o 'não' em casa," which translated means, "I forgot the 'no' at home." A Dallas brewing company, Deep Ellum Brewing, marketed their Dallas Blonde beer with the tagline, "Goes Down Easy" next to a blonde woman on the bottle. (Then responded to critics by calling them assholes. Stay classy, Deep Ellum.) Belvedere also used similar phrasing on a promotional Facebook image, saying "Unlike women, Belvedere always goes down easy." They later removed the post.

Hey, marketers, let's try a new tactic: ask yourself these questions before giving the a-okay to a campaign—

1) Does the line sound rape-y/gross/misogynistic/offensive? YES? THEN DON'T PRINT IT.

2) No really, that's it. There's no second question.

Women Are Super Pissed-Off About These Beach Body Ads

10 Awesomely Devastating Celebrity Comebacks That Will Give You Life