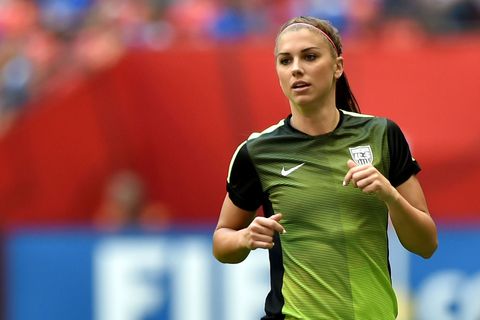 Update, 7/21: The featured stars of FIFA 16 have been announced—and U.S. Soccer star/World Cup champion/all-around badass Alex Morgan will be the first woman EVER featured on the game. She shares the spot on the historic release with Lionel Messi. Or rather, Messi shares the spot with *her.* Boom.

Original story, 5/29: Finally, female soccer players are getting a fair shake. For the first time in the game's history, Electronic Arts's FIFA series will let you play as a women's soccer team.

FIFA 16 will feature 12 women's national soccer teams, including the United States, Canada, Mexico, and Germany. (It's good PR for the international soccer league, which has been in the middle of a gigantic corruption scandal lately.)

EA used four all-stars from the U.S. as models: Sydney Leroux, Abby Wambach, Alex Morgan, and Megan Rapinoe, who come to life through motion capture technology that recorded how they move on the field (funny little ping-pong-ball suits and all):

Canada's soccer team used 360-degree scanning so their players looked realistic, and a creepy-sounding "mobile head scanning unit" went to soccer games around the world to make sure everyone's faces matched up with reality.

Though the move is definitely an empowering one, life is not so rosy for the actual soccer players. Mashable reports that female players have a host of disadvantages both on and off the field, like being forced to play on astroturf rather than real grass, even though men have never had to do that.

FIFA 16 will be released on PC, Xbox, and PlayStation in September. And if the game matches up to the crazy levels of girl power in the commercial, we're in.

This content is imported from YouTube. You may be able to find the same content in another format, or you may be able to find more information, at their web site.
This content is created and maintained by a third party, and imported onto this page to help users provide their email addresses. You may be able to find more information about this and similar content at piano.io
Advertisement - Continue Reading Below
More From Culture
The 'Friends' Cast Just Dropped Iconic Merch
Twitter Is Obsessed With Greg on 'Bachelorette'
Advertisement - Continue Reading Below
You're About to Hear a Lot About Athing Mu
Meet the Cast of Katie's 'Bachelorette' Season
Blake Moynes Has a Thing For 'Bachelorette' Leads
'Skye Falling' Should Be on Your Summer TBR List
What Makes an Olympic Moment?
Team USA Fencers Protested Their Teammate
Hang On, What's "ROC" at the Olympics?
Suni Lee Just Scooped Up Gold in Tokyo