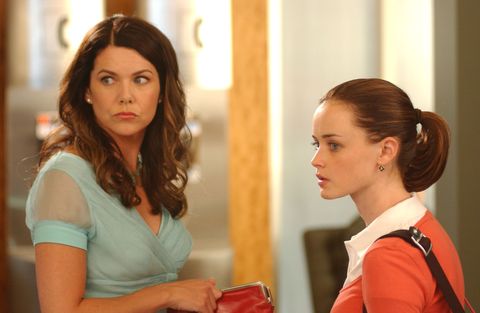 The line snaked around the block of the Paramount Theatre as anxious fans waited in the Texas heat for the high point of this weekend's ATX Television Festival: The Gilmore Girls reunion. Eight years after we said a tearful (oh admit it) goodbye to Stars Hollow and its lovable inhabitants, the creator and cast gathered one more time to reminisce, laugh, and even shed a few tears.

On stage (and, of course, to the tune of the show's theme song, Carole King's "Where You Lead") sat creator Amy Sherman-Palladino and stars Lauren Graham, Alexis Bledel, and Kelly Bishop (who regaled the audience with a few of her signature Emily stares). Topics ranged from the creation of the show to casting and auditions to favorite character lines ("Oy with the poodles"), and yes, rumors of a movie.

Here are eight little tidbits they revealed, which will surprise even the most loyal fans.

The show came about when Sherman-Palladino had a meeting with the then-WB Network. "I went in and pitched a bunch of stuff to them and the last thing I said was that I have this idea about a mother and daughter and they're more like friends and they said, 'Ok, we'll buy that.' And I walked out and turned to my manager and said, 'I have no idea what that is!'"

Shortly after pitching a story that she hadn't fully realized yet, she went on vacation to Connecticut. It was fall and the writer was inspired by the foliage, the pumpkins, the hayrides, and community of the town: "Over the weekend I said, 'We're staying at an inn, maybe she works at an inn.' I was desperate."

By the time Monday came, she says everything had all fallen into place. "I wrote the [pilot's] kitchen scene on the hotel stationery."

Graham on reading the part of Lorelai:

"Something really clicked. I remember Christopher Reeve in an Inside the Actors Studio said, the way you know if a part is really for you is if you can't stand the idea of anyone else doing it. And that's how I felt about this."

Bledel on the part of Rory:

"I got the script and I had the wonderful experience that actors have when they read something and instantly know who that person is and what voice they have, and what they are thinking. Similar to what Lauren said, where you have that instant connection."

Bishop on her audition:

"I just did it in the regular New York-actor way. I don't like to audition. I don't think I audition very well." ("You're wrong," Sherman-Palladino interjected.) Bishop continued, "Because I love this like they did. I was looking at this like, I own this woman. I know who she is. I love these words."

The scripts were more robust than your average TV episode, so characters had to intentionally deliver dialogue at a faster clip. "We used all the scenes, we just had to speed them up," mused Sherman-Palladino.

What was that like for Graham to memorize so much dialogue and speak at that rapid-fire pace?

"It's a little bit the way I am anyway, which I think is part of the weird mind-meld that we just had. And that's the luck of working with the right person," she said. "That wasn't difficult; [rather] it was the pure page count per day. It's really like theater, it's both technical and emotional and just more language than most TV or film has, but to me that was heaven."

Bledel admitted that she didn't' quite know what she was doing that first season when it came to the technical aspects of filming. Graham says she had to literally grab Bledel to make sure she was on camera. "You can watch me do a lot of manhandling Alexis in the early episodes. Part of the 'wow they have instant chemistry' is I was literally mauling her all the time."

Luke would rather be fishing

Each actor was asked where they see their character today:

Bledel: "I think Rory would be a journalist. She'd be on her highly ambitious career path."

Patterson: "Luke has closed up shop and moved to a Lake. He closed Luke's Diner and now has a bait and tackle shop and …" ("Does he have a girlfriend?" Graham coyly interjected.) "Lorelei is coming out for a fishing lesson," Patterson reassured her.

Truesdale: "It's a tough one for Michele, because I never really understood how he ended up in that town…."

Weil: "I like to think that Paris and Doyle are still together…"

Czuchry: "Logan would not be working."

Torres: "I always thought Miss Patty would end up running for mayor of Stars Hollow and winning, and she wouldn't know what she was doing."

Padalecki: "I think Dean Forester would have worked long and hard at the market, and probably would have taken over."

Graham wasn't satisfied about how things ended with Luke and Lorelai

Daniel Palladino noted that bringing Luke and Lorelai together was not taken lightly: "A big decision we had to make was when Lorelai and Luke were going to be together. It was almost about midway through season 4 that we realized it was time. We were getting osmosis-like feedback from the audience that it's time…we hit that and it opened up a brand new thread."

To this, Graham says: "I just love the tension between them so much, but I think it was handled really well. For me, it didn't end in a satisfying way. We weren't sure it was the end." To the palpable relief of the audience Graham then adds, "I think they're together, 100 percent."

The writers were protective of Rory losing her virginity

Another crucial plot moment for Gilmore Girls was the question of Rory's "first time." "The big one was when Rory was going to have sex," says Sherman-Palladino. "We weren't trying to make a statement or anything like that. We were really trying to play the truth of who she was and a decision she's not going to make lightly. When we did the storyline, I wanted it to be Dean and I wanted them to not be together at that time because I felt like there was something about that great, first boyfriend."

General consensus is that the cast would like to make a Gilmore Girls movie, but…

Patterson inadvertently and rather apologetically created buzz in a recent interview about the possibility of a Gilmore Girls movie.

"It's the most-asked question I get from fans," he says. "And it springs more from hopefulness. Like a love letter back to the fans and you guys made this show and now it's growing exponentially with Netflix, so I think it's kinda time, don't you?"

Sherman-Palladino jumps in to explain: "I'm sorry, there's nothing in the works at the moment. Here's the good thing: Nobody here hates each other, that's very important. It would have to be the right everything — the right format, the right timing. It would have to be honored in a certain way. And if it ever came around, we would all jump in and do it. If it ever happened, I promise you, I'd do it correctly."