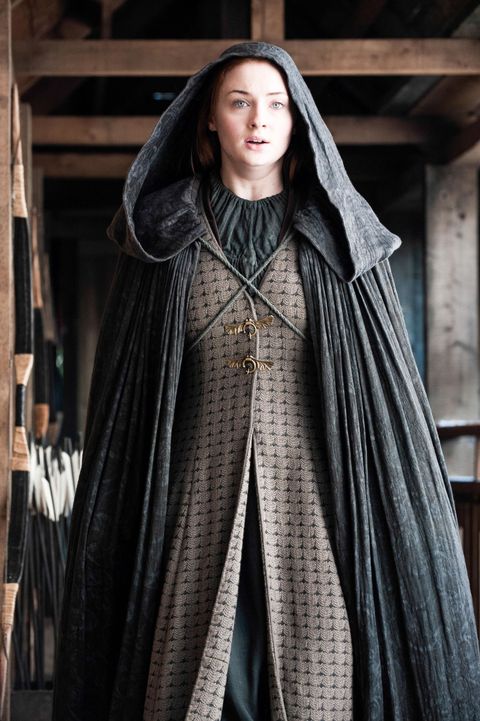 1. Did you predict the future completely, totally, 100% wrong (and burn a cute little lizard girl in the process)? NBD! Just grab the nearest horse and ride off into the sunset before anyone finds out.

What Happened: Turns out sacrificing Shireen wasn't the best battle strategy: The next day, half of Stannis' soldiers deserted the camp and Lady Selyse hanged herself. Oops! Realizing no evil shadow baby could help get her out of this inaccurately-prophesied mess, Lady Melisandre fled the scene.

The Lesson: Everyone thinks predicting the future and appeasing the gods is so easy, but sometimes you have an off day. Pack it up and go home (as fast as humanly possible) before an angry mob forms to burn you at the stake. Better luck next time.

2. Tap into the Braavos Human Face Collection™ and use your disguise to get revenge. (Warning: Side effects may include blindness.)

What Happened: With full access to the Braavos Human Face Collection™, Arya disguised herself as a brothel girl and pulverized longtime enemy Ser Meryn Trant with an oyster knife. But since the Many-Faced God didn't give her permission to take a life, Arya was punished with blindness.

The Lesson: The Braavos Human Face Collection™ is AWESOME. So what if you get in trouble/go blind for using one of the masks? Totally worth it.

3. Escape certain death by jumping off a ten-story castle—the snow will break your fall!

What Happened: Sansa Stark lit a candle to signal Brienne of Tarth (finally!), but then Ramsay Bolton's side piece Myranda and her jealousy/arrow got in the way. Magically, Reek grew a set of balls and pushed that psycho to her death. He and Sansa then decided that the most logical plan of escape was to, uh, jump out of the castle and into the snow.

The Lesson: Snow doubles as one of those huge stuntman airbags, so it'll break your fall—probably. We'll know next season.

4. Fly your baby dragon until he's tired and hungry and doesn't feel like taking you home. Perfect opportunity for some mother-son bonding.

What Happened: Daenerys Targaryen's road trip with her dragon son Drogon was a little too exhausting, and he couldn't fly her back to Meereen. Then, while taking a stroll in the middle of nowhere, Dany bumped into a mega clan of Dothraki warriors.

The Lesson: Teenage dragons can be really difficult. When they're in their teens, they go through a rebellious phase and don't want to be seen holding hands with mommy. Time to reconnect with your son—fly with him for hundreds of miles (or until he collapses from exhaustion), and watch a strong, new bond form.

5. Say goodbye to your enemies with a poisonous kiss. Matter of fact, try it out on the king's sister; it's not like you'll start a war or anything.

The Lesson: Someone pissed you off? Deal with it by poisoning that person with your lips. Yeah, your actions may or may not divide the realm, but at least you got a chance to throw shade in the coolest way possible: THE LITERAL KISS OF DEATH.

6. Feeling sluggish? Do the King's Landing detox: Atone for your sins by marching across the city naked. Enlist a friend to utter the word "shame" every step you take.

What Happened: Broken down after weeks of water and hairstyling deprivation, Cersei Lannister admitted (some of) her sins to the High Sparrow. To cleanse, she had to walk through the kingdom naked while a silent sister trailed nearby and barked the word "shame" over and over and over again.

The Lesson: Tell your most-trusted servant to have a warm bath waiting for you at the end of the road—and tell him not to forget the LUSH Bath Bombs. Oh, and don't forget to wake up that mountain-sized monster for some godddamn revenge.

HBO
This content is created and maintained by a third party, and imported onto this page to help users provide their email addresses. You may be able to find more information about this and similar content at piano.io
Advertisement - Continue Reading Below
More From Culture
'Bachelor In Paradise' 2021: Everything We Know
The 'Friends' Cast Just Dropped Iconic Merch
Advertisement - Continue Reading Below
Twitter Is Obsessed With Greg on 'Bachelorette'
You're About to Hear a Lot About Athing Mu
Meet the Cast of Katie's 'Bachelorette' Season
Blake Moynes Has a Thing For 'Bachelorette' Leads
'Skye Falling' Should Be on Your Summer TBR List
What Makes an Olympic Moment?
Team USA Fencers Protested Their Teammate
Hang On, What's "ROC" at the Olympics?