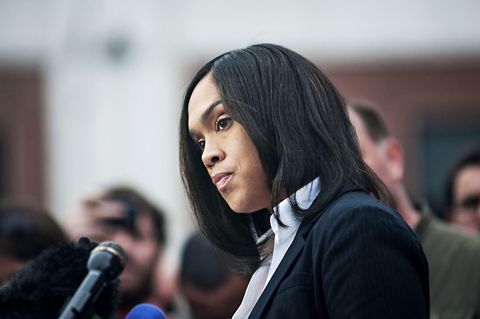 Just two weeks after Freddie Gray, a 25-year-old African-American, died from spinal cord injuries suffered while in police custody, State's Attorney Marilyn Mosby shocked her city of Baltimore and the country by charging six officers with causing his death. At a press conference announcing her decision, she said, "To the youth of this city, I will seek justice on your behalf...You're at the forefront of this cause, and as young people, our time is now." Her bold words and quick action shot Mosby, 35, to the national stage—her decision-making was bolstered on May 21 when a grand jury indicted all six officers on charges including second-degree murder (for one officer), manslaughter, and assault. Here, she discusses her goals, her relationship with police officers—who have been dealing with an unprecedented surge in violence—and being a female prosecutor on the rise.

Before you were elected in November 2014, you were working in the insurance industry. Why did you want to return to the prosecutor's office?

Marilyn Mosby: My heart and passion has always been to reform the criminal justice system. I want to be a public servant, and I wanted to be a prosecutor because I felt it was the best way forward. After law school, I became a prosecutor in Baltimore where I prosecuted cases for six years. I left and went to the insurance industry where I was prosecuting and litigating insurance companies. This is not something that is new to me.

MC: Not only are you the youngest big-city prosecutor in the country, you are also a woman and African-American. How do you handle the challenges that presents?

MM: I just do it. No distinction is going to define who I am. Yes, I'm young; yes, I'm a woman; yes, I'm black. But that gives me a well-rounded perspective for the decisions I have to make.

MC:
What was it like to have such a high-profile case happen so soon after you took office?

MM: I had been in office for over 100 days, and from day one, I had to make difficult decisions. That's the way this job is.

MC: You've lived in Baltimore for 10 years. What's your relationship like with the residents?

MM: I've always had a great relationship with the community of Baltimore. I mean, that's how I won, right? You can't allow other people to define your purpose or your destiny. If that were the case, I wouldn't be where I am. So, do I have a great relationship with the community? I think so. They voted for me to come into this position and to exercise my discretion in the way I equally and fairly apply justice.

MC:
Since filing the charges, has your relationship with the police department deteriorated?

MM: Listen, I get it. I come from many generations of police officers. My grandfather was one of very few African-American police officers on the force in Boston, and four of his brothers were police officers, along with my uncles and my mom and dad. Since I've been in office, I've collaborated [with law enforcement] on a number of programs. There have been countless examples where our relationship is working. Is it strained? No, it's not strained, because a majority of police officers are hardworking people who risk their lives, day in and day out. I believe the majority of the department gets that these charges are not an indictment on the entire force. Are some people angry? I'm sure they are, but I'm not treating this case any differently than I would any other.

MC: What are you hoping to accomplish in office?

MM: My top priority is to go after violent repeat offenders, and we've done that. We've gotten a lot of high-profile individuals off our streets [including murderers, gang members, and a serial rapist]. The biggest problem I see day after day is this culture of distrust. What we've seen all across the country, not just in Baltimore, is a disconnect between law enforcement and our communities. You can't ignore the fact that so many people have been affected by the disconnect and that people are expressing that frustration. I think it's incumbent on me to break down those barriers.

MC:
When you talked about now being the time for young people, what did you mean?

MM: I'm saying, let's utilize this moment for a movement, and let's start to address some of these structural and systemic issues that plague urban communities across America. Let's utilize this frustration to reform the way that things have been. I'm happy that we are having this conversation, but let's do something about it.

This article appears in the August issue of Marie Claire, on newsstands July 21.