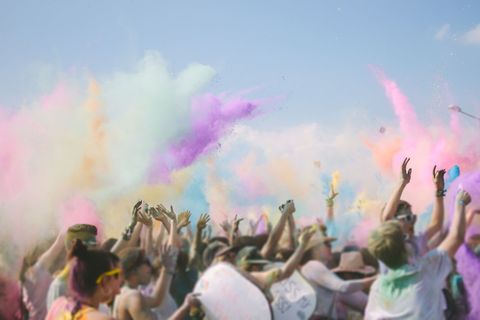 Update, 7/16: Okay, we should have known better than to invite an Esquire man into our midst, so it's really on us that they've gone in a completely different direction and declared Omi's "Cheerleader" Song of the Summer. But no matter—we're so confident in our clearly superior choices that we'll even add "Cheerleader" to our poll at the end of this story, knowing that any one of our picks could easily kick their winner's ass. It's on, boys.

Because we (as a nation) need to sort this out ASAP and we (as internet dwellers) have the means with which to involve The People—because that is pretty much the whole point of the Song of the Summer—we (me) invited a bunch of editors to get the discussion started, after which you will please kindly vote for my choice because I am right. Thank you.

Chelsea Peng, MarieClaire.com assistant editor: "So...what do you guys think is this year's SOTS? I'm afraid it might be that Bieber song with the umlaut."

Samantha Leal, MarieClaire.com senior editor: "Demi is really trying to make *her* song happen—it's even got it in the title."

Chelsea Peng: "Okay, verdict: They probably play this a lot at H&M."

Samantha Leal: "I would buy the swimsuit if this were playing for sure."

Chelsea Peng: "What about criteria for what makes a good SOTS?"

Kenny Thapoung, MarieClaire.com social media editor: "Something I want to yell all day every day. And make me wiggle my hips. And not be too embarrassing to play at a party."

Samantha Leal: "What about the Selena song? #amIatween"

Jessica Pels, MarieClaire.com site director: "Can I vote Leon Bridges 'Smooth Sailin' in? Also it should be noted: Songs of the Summer must be upbeat. They are meant to perk you up to make you want to have the party fun times. It's not the Song of the Summer if we (i.e. the people) don't all agree it is, no? [Editor's note: This is where you come in—the poll at the end of the story.] And they must be something you want to play REALLY LOUD while you drive."

Lauren Valenti, MarieClaire.com associate editor: "'CHA CHA' 4 LIFE. Nothing else will get my vote."

Matt Patches, Esquire.com senior writer: "Is Brandon Flowers's 'Dreams Come True' in contention? It rates highest on the scale of 'Will I dance to this as I walk down the street, inevitably embarrassing myself?' The answer is yes, yes I would. But I'm fooling myself because the Song of the Summer is 'Bad Blood.' The Apple battle puts Taylor over the edge. It's political at this point."

Chelsea Peng: "What about umlaut song?"

Jessica Pels: "DID YOU ALL JUST SEE THAT? Samantha Leal likes Bieber. It's in writing."

Matt Patches: "A Bieber song will never be the Song of the Summer, just like a released convict can never become president."

Todd Feiler, Hearst Digital Media product manager: "Demi's 'Cool for the Summer' could be it, but it's trying a little too hard. TBVH, pop music is hurting right now."

Samantha Leal: "Biebs is currently my top contender, with Demi a strong second. I think once Selena's 'Good for You' gets another remix, you'll be hearing that shit everywhere too if you're not already."

Chelsea Peng: "Even though I would never have thought I would say this, I am going with the Bieber song because 1) it follows me around everywhere, mostly because my shower makes a similar noise 2) I can remember what it sounds like (except the part where there's singing) even though I don't want to and 3) there is really nothing else. Also, it has subliminal messaging, which I enjoy."

Samantha Leal: "I think point 3 really sums it up."

Todd Feiler: "I think Bieber is the best song, but I think it should be 'Cool for the Summer' because it's the most upbeat and fun, it's the one you'd most want to hear at a pool party, and you can sing it in your car. I'm going rogue."

Jessica Pels: "I think Leon Bridges is the soon-to-be breakout star of 2015 and that *cool people* would think pretty much any of the songs off his debut album could be the Song of the Summer. But I realize that makes me sound like a brat, and so I must also add: I do find myself *accidentally* listening to 'Where Are Ü Now' a lot. Intentionally."

Lauren Valenti: "You're all deaf and I'm going to go back to Cuba, where they can appreciate an infectious cha cha anthem."

Chelsea Peng I'm Chelsea Peng, the assistant editor at MarieClaire.com.
Advertisement - Continue Reading Below
More From Culture
Who Will Be on 'Bachelor in Paradise' in 2020?
When Will 'The Bachelor' Women Tell All Air?
Advertisement - Continue Reading Below
'The Bachelor' Has Already Finished His Season
The 83 Very Best Rom-Coms of All Time, Ranked
An Investigation Into the Next 'Bachelorette'
The Best Korean Dramas to Get You Hooked
Who Is 'Bachelor' Contestant Victoria Fuller?
Everything to Know About Peter Weber's Ex
Read an Excerpt From the Uber Whistleblower's Book
The Must-Watch TV Shows of 2020