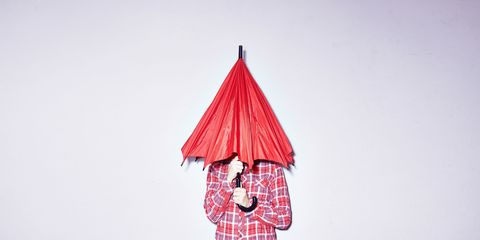 When Charlize Theron broke up with Sean Penn, she didn't just go "Later, dude"—she (allegedly) stopped answering his calls and texts and completely disappeared like they were never secret-engaged in the first place.

I don't know what despicable thing he did, exactly, to deserve such treatment, but maybe he didn't *need* to disrespect her Pomeranian to elicit it. Maybe Charlize just implemented this reported relationship-ending technique because that's what we do now. It's the ol' ice-out or, as the Youngs call it, "ghosting."

People have been methodically avoiding one another since Wilma found some unsavory cave paintings under Fred's bed and didn't know how to confront him about it, so the concept isn't new. But ghosting, along with other newly popular shirking behaviors like the Irish goodbye and not opening your Facebook messages because of those stupid read receipts, has become so socially acceptable—so ha-ha-I-saw-this-on-the-Fat-Jewish-and-I-can-totally-relate—that it's almost like the cowardly thing is now the normal thing. Since when is texting someone to break up with them actually the *honorable* move?

Probably since we started avoiding those sit-down-because-you-deserve-to-hear-the-truth chats. Instead, we make ourselves less and less available until he/she gives up. Hell, even when we leave social gatherings, we sneak out without telling anyone and justify it as being more considerate than interrupting the party to thank the host. (This maneuver, the aforementioned Irish goodbye, is rude but also dumb because the police need to establish a timeline. THEY ALWAYS NEED TO ESTABLISH A TIMELINE! Think about that.)

Hey, I get it, it's easier to slink away. Maybe, counterintuitively, it's even easier now in the social media era to do it—the whole "I'm posting really fun-looking Instas while I'm not responding to your three days' worth of texts" thing does send a pretty clear message.

But it comes down to this: Modern civilian life already affords so few opportunities for meaningful human interaction that, if we continue, what shreds of courage we have left might very well go the way of the Juicy tracksuit—we might evolve out of the ability to take a deep breath, tap our annoying coworkers on the shoulders, and punch them in the face let them know in a reasonable and calm manner how we really feel.

To answer the question, yes, we might be wimps. But we don't have to be. Let's just make ghosting uncool enough that we can all go back to being appalled by post-it notes, shall we?

Sex and the City
This content is created and maintained by a third party, and imported onto this page to help users provide their email addresses. You may be able to find more information about this and similar content at piano.io
Advertisement - Continue Reading Below
More From Culture
Jessie Ennis & Charlotte Nicdao on 'Mythic Quest'
The True Crime Podcasts We've Been Hooked On
Advertisement - Continue Reading Below
Zendaya Shared Pics From the Set of 'Euphoria'
Are Chloe and Mitchell from 'The Circle' Dating?
Get to Know DeLessa From 'The Circle'
The Best Korean Dramas to Get You Hooked
Did Beyoncé Really Meet Selena?
How Selena's Sister Honors Her Memory
Get to Know Courtney From Season 2 of 'The Circle'
Meghan Will Release Debut Children's Book in June