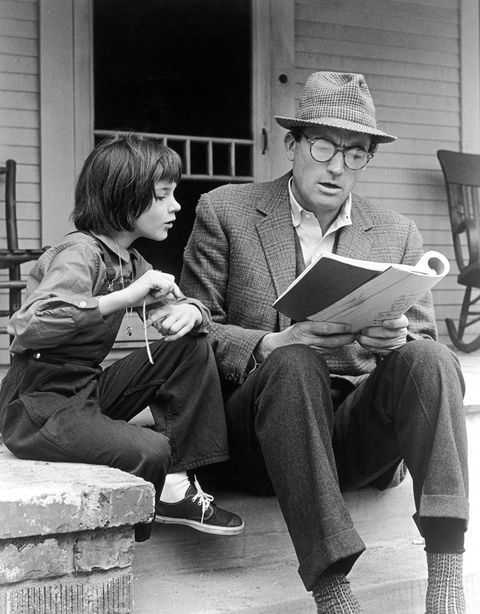 We know Jean Louise Finch (Scout) for her overalls, tomboyish shenanigans, and outspoken curiosity about the world in Harper Lee's To Kill a Mockingbird, told to us through her perspective as a six-year-old girl. In Lee's Go Set a Watchman, released July 14, Scout is a fiercely independent 26-year-old woman returning to Maycomb after living in New York. As Mary Badham, the actress who played Scout alongside Gregory Peck in the 1962 film adaptation says, Jean Louise is "still fabulous and still pushing buttons."

We sat down with the actress to discuss Scout's growth as a character, the differences between Go Set a Watchman and To Kill a Mockingbird, and her relationships with Harper Lee and "Atticus" throughout her life:

Marie Claire: From To Kill a Mockingbird to Go Set a Watchman, we see Scout evolve into a young woman. How did you interpret her growth from a young child, into an outspoken, independent young woman? Did anything about her surprise you?

Mary Badham: I think she's a lot more passionate than I expected, and very over the top about her views. It's a growth process for Scout. In Mockingbird, we see her as a little, idealistic child looking at the world through a child's eyes, and here, we see an adult woman who has been in a totally different world. And I know when I came back from filming Mockingbird in California, I felt the same thing. There were rules and regulations that had to be followed and you didn't break them, and if you broke them, you were ostracized. So, it's very, very difficult to live under those conditions when your beliefs are so radically different from everyone around you.

MC: What do you think about the Scout we see in Go Set a Watchman—do you feel like you can relate to her?

MB: Yeah I definitely relate to her, and I think we all can relate to what she's going through. I think this book is going to be such a great teaching tool because I think all of us, when we get out of college and we've been away for awhile at a university, we come back and talk with our parents and we bring back whole different viewpoints that we're basing our thoughts on because of where we've been and what we've done. I think our parents realize this and they help us along with the growth process by making us think through our problems and our "beliefs" to make sure that they are what we really believe in.

MC: There are many emotional moments in the book and there's been a lot of controversy surrounding Atticus and his character. At your July 14 reading of Go Set a Watchman at the 92nd Street Y, you talked about how the novel is significant and important for our country right now. Does the new book taint your image of Atticus or the legacy of To Kill a Mockingbird?

MB: I don't think so. It just gave a more adult, realistic view of him. I don't think his main, core value changed at all. And I think that's explained in the Uncle Jack chapter, where Jack talks about having to live in a place and get along with everybody. My father was so like Atticus. He believed in justice and honor and truth and dignity for everybody but trying to accomplish that with the set of circumstances you're given is very difficult. Back in those days, if you tried to go up against the system, they would attack not only your character, but your business and family. It was really, very difficult to have those kind of beliefs and want that kind of justice so you had to fight it from the inside in order to get done what needed to be done. It was a scary time.

MC: In Go Set a Watchman, we see Maycomb twenty years later. There is discussion of very serious topics, but at the same time, there's also a lot of humor and plays on tradition. I found myself cracking up throughout the book.

MB: Oh yeah, so many funny moments. Harper Lee is just brilliant with that. The flashbacks were totally necessary. And it's so true Southern. It's just funny stuff. And I would find myself crying with laughter and the next minute crying with sadness.

MC: You had said that you didn't read the book until years after you filmed. Why did you decide to hold off on reading To Kill a Mockingbird?

MB: I had my own little world up there on film and I was very happy with that, and I didn't want the book to interfere with that. You know how sometimes you see a film and then you see the film, and you go oh man, that just really messes things up? I didn't want to do that, I was very happy with the product that we had. And then I read the book. But I didn't read the book until was older so that was really good, because then I could look at it in a different light, I could accept the differences, I could accept all the new characters that I had no knowledge of before. And there was so much in the book that was so great, but we just couldn't use it all, there was just no way. I would have loved to have been able to show the Mrs. Dubose scenes because we filmed those. That is so appropriate to talk about today with drug culture and everything, and the idea of it as a teaching tool because that's such a problem now. Both of these books have so much in there. There's so much to talk about. And of course, Go Set a Watchman is perfect for what's going on right now. With the whole flag controversy and Southern rights, it speaks right to that.

MC: You've said that you maintained a close relationship with Gregory Peck, who you called "My Atticus" after filming. Could you talk a little bit about that?

MB: He was just a wonderful person. He really, truly was Atticus as we see him in Mockingbird. He just was to me at that time another daddy. And when my father did die, he took the time to pick up the phone and call me and check on me and send me a plane ticket to come and be with me, and that really makes a big difference in your life. To have somebody who's that important and that much of a role model to everybody around him, to take the time to call or say I want to see you, I'm going to send you a plane ticket. He would ask me about what I was studying in school and was I doing okay and was I reading a lot, because he was a big reader and the people that he hung with were very intelligent and very socially motivated and I think that's where I get a lot of my political views to this day, is because of his feelings about social justice and honor and integrity.

MC: Do you have a favorite scene from the movie or especially funny memory from filming?

MB: I think my favorite scene is when I'm reading to Atticus when he's putting me to bed because that was something that I had always wished that my father would do. But in those days, the servants put the children to bed and that was it, off you went. We had a Calpurnia who raised us. You didn't see anybody until the next day.

MC: How has your relationship been with Harper Lee over the years and have you spoken with her about the book?

MB: I have not spoken with her about Go Set a Watchman, but all the exchanges that we've had have been wonderful. I think it's kind of funny, the first time I went in to see her I said, 'I know you like your privacy and I don't want to intrude, and I didn't come to see you because I didn't want to push myself on you.' She goes, 'young lady, don't you ever come here and don't stop and say hey to me.' She's just wonderful, and she's such a fighter. She loves to laugh, she's very funny.

MC: And how did you feel the first time reading the novel?

MB: Very nervous. I had to put it down for a while. Especially with the press that it got, I was really, very afraid of where the book was going. But then I just kept reading and it all made sense towards the end. Those last three chapters are the most important, and they have to be read very, very carefully.

MC: Scout seems to be very forward thinking. Do you think she's a feminist?

MB: I think she is, I do. She would not set in to be in that cushy role of wife and stay-at-home and be with the kids kind of thing, I'm not sure that she can take that.

MC: Do you think that she will end up staying in Maycomb, or do you think she's bound for New York?

MB: No, I think she'll split eventually and go to New York. She's just not cut out for Maycomb. I totally get it because I couldn't stay either. I couldn't stay in Alabama. Things were moving too slowly and I was not going to be told, you cannot be friends with somebody because of the color of their skin or because of their religion. I wasn't going to have that.

MC: What do you hope Go Set a Watchman will do in conversations today?

MB: I hope that everyone will give it a chance and really read the book thoroughly and carefully, and just enjoy it for the sheer joy of it, because there is a lot of joy in this book. And I think that they'll find a lot of strength in Atticus. I think they're going to feel that he was even braver than he was before.

This content is created and maintained by a third party, and imported onto this page to help users provide their email addresses. You may be able to find more information about this and similar content at piano.io
Advertisement - Continue Reading Below
More From Culture
Every 'Squid Game' Hint You Missed Along the Way
Meet the Cast of Netflix's 'Squid Game'
Advertisement - Continue Reading Below
Listen to the Best New Love Songs of 2021 (So Far)
Shalita Grant Is Hilarious in 'You'
'Squid Game' Season 2: Everything We Know
Breaking Down the 'You' Season 3 Finale
Get Ready for Some Incredible Books in 2022
Fans Are Wondering If Madre Linda Is Real
So, Who Wins Michelle's Season?
Win Halloween With One of Those Costumes for Duos