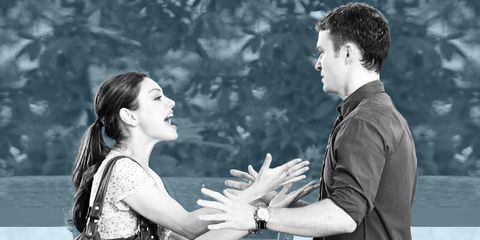 I realize I have a much easier job than celebrities do. Because while I have to think of interesting questions to ask them in interviews, they have to deal with answering them. And, you know, *some* interviewers like to lob the same stupid, personal, and bizarre questions at them over and over again, day in and day out.

As I am not a patient person but am trying to be a good one, I've started taking notes from Hollywood stars and their expert handling of awkward conversations. And what do you know? It works. Here, Lessons in How to Talk to People From Celebrities: Part One.

1. You don't have to be an asshole if someone doesn't know what they're talking about.

Sometimes, people say the wrong things or don't care to pay attention before talking to you. In this case, it's better to kindly remind them why they should do that in the future rather than be an asshole about it. Because that's what *classy* people do, but also, you'll feel better about yourself than if you barked at them instead.

Is this uncomfortable? Yup. Do you respect Tyra more after? Definitely.

3. Other times, you can (and should) totally stick to your guns—especially if they're out of line.

4. People are just people, so cut 'em some slack.

Sometimes, you have to remember that the person you're talking to doesn't know what they're talking about either. Or if they do, they might not be saying it correctly—so, you know, it sounds like they don't. So remember to a) relax and b) take charge, if you need to. See: Mila Kunis (again).

5. You don't *have* to give people the dirt they're looking for.

Often it can seem, especially for women, like "opening up" is how we bond. But personal dirt is just...not always relevant.

6. Don't let the people gunning for an argument fluster you.

Thanks for the reminder, 2 Chainz.

7. You're not always going to vibe with the person you're speaking to. It's cool, move on.

Not everyone is going to get your humor.

8. If all else fails, stare awkwardly until they change the subject.