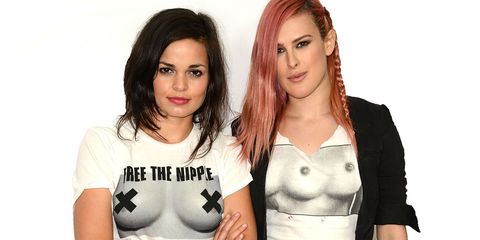 If you post a photo on Instagram in which nipples are visible—and those nipples belong to a woman—there's a good chance it will be taken down. Just ask Rihanna, or Miley Cyrus, or Chelsea Handler, or Naomi Campbell.

But if you post a photo of a man's nipples, you're in the clear. That's led a whole slew of users to cry foul and rally around the #freethenipple hashtag. Some have even Photoshopped images of men's nipples on top of women's breasts to prove their point.

After nearly a year of #freethenipple backlash, Business Insider reports that Instagram CEO Kevin Systrom has finally explained their censorship: Apparently it's all about Apple. In order to keep your app available for Apple smartphones, you have to abide by the company's standards. Unless your app is specifically restricted for adults only, you can't have any nudity, and Systrom wants to keep the app available to everyone. (Apple declined to comment to Business Insider.)

Instagram is "committed to artistic freedom," he said, but "in order to scale effectively there are [some] tough calls." Photos of breastfeeding women and mastectomy scars are OK, but other nipple photos aren't. It's a tough call, since it's pretty easy to find naked photos on apps like Twitter and Snapchat, but Instagram is trying to play it safe. Looks like it's up to Apple to truly #freethenipple once and for all.