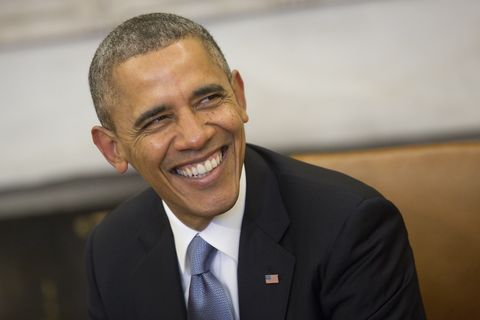 Thanks in large part to President Obama's persistent support of the LGBT community, we now live in a country where everyone—regardless of sexual orientation or gender—is free to marry the person they love. So, it's no surprise that OUT Magazine wanted to honor the president by making him their Ally of the Year.

President #BarackObama is our Ally of the Year and cover of the #Out100: https://t.co/h9GBgXcoOZ pic.twitter.com/89UZytobYP

POTUS is the first president to pose for an LGBT publication, which OUT notes is "a historic moment in itself, and a statement on how much his administration has done to advance a singularly volatile issue that tarnished the reputations of both President Clinton and President Bush."

In his interview with the magazine, Obama talked candidly about why equal rights is so important to him. "This really goes back to when I was a kid, because my mom instilled in me the strong belief that every person is of equal worth," he said. "At the same time, growing up as a black guy with a funny name, I was often reminded of exactly what it felt like to be on the outside. One of the reasons I got involved in politics was to help deliver on our promise that we're all created equal, and that no one should be excluded from the American dream just because of who they are."

Obama also said that his daughters, Malia and Sasha, live in a reality where "discrimination in any form against anyone doesn't make sense," and that he hopes their generation will spur change for future generations.

"I was honored to stand in the Rose Garden and reiterate for every American that we are strongest, that we are most free, when all of us are treated equally," Obama said in regard to his now-famous speech about SCOTUS's ruling. "I was proud to say that love is love."

Mehera Bonner Contributor Mehera Bonner is a news writer who focuses on celebrities and royals—follow her on Instagram.
This content is created and maintained by a third party, and imported onto this page to help users provide their email addresses. You may be able to find more information about this and similar content at piano.io
Advertisement - Continue Reading Below
More From Culture
Who Is Zach J. on 'The Bachelorette'?
A Classic Horror Bucket List for Scary Movie Buffs
Advertisement - Continue Reading Below
'The Queen's Gambit': All About Those Green Pills
This Is the New 'Bachelorette' Villain
Dale Moss Is a Super Important 'Bachelorette' Star
It's Been a Weird Year for 'The Bachelorette'
50 Sexiest Movies of All Time
'The Queen’s Gambit': The True Story, Explained
Thoughtful Gift Ideas for the Work Wives You Miss
How to Join Marie Claire's Online Book Club