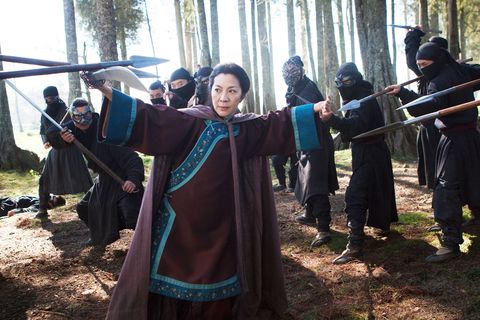 Netflix isn't just going all out with binge-able TV shows this year. The streaming service is also becoming a moviemaker of its own, creating or buying the rights to major movies this year. From indie dramas to action-packed thrillers, the movies run the gamut depending on your taste, and even feature big stars like Paul Rudd and Brad Pitt.

Check out what Netflix has to offer this year and get your movie-night schedule set in advance.

Amateur seems perfect for Friday Night Lights obsessives. The movie follows a 14-year-old basketball star who films a highlight reel that goes viral. He then starts clashing with the older players on the team and his brand-new coach. Director Ryan Koo released a prequel short film to Amateur back in 2013, which you can watch above.

If you like Orphan Black, you're going to love this. Tony Elliott, one of the show's writers, is directing this post-apocalyptic thriller, which takes place in a world where oil has run out. Robbie Arnell stars as an engineer who is working on new energy technology, but it backfires when it forces him and his friends to relive the same day every day, Groundhog Day-style. The movie also stars Rachael Taylor, who played Patsy Walker on Netflix's Jessica Jones.

This thriller stars Vinessa Shaw, who plays a psychiatrist who suffers a violent attack and tries to pick up the pieces afterward. She also comes across a new patient who has his own dark story to tell. This one might not be best for right before bed.

Netflix's follow-up to the 2000 martial-arts hit brings back Michelle Yeoh as Yu Shu-Lien, who has to protect a powerful sword against evil forces. If you like incredible stunts, high-flying fight choreography, and Harry Shum, Jr. from Glee, you have to check this out when it premieres on February 26.

'First They Killed My Father'

Angelina Jolie is directing this sure-to-be powerful adaptation of a memoir by a Cambodian human rights activist. Loung Ung was trained as a child soldier in a work camp for orphans, but survived to tell her story. She and Jolie have been close friends since 2001 and co-wrote the screenplay. Jolie's son Maddox, who was born in Cambodia, will also be involved in production.

'I Am the Pretty Thing That Lives in the House'

The Affair's Ruth Wilson plays Lily, a nurse who cares for an elderly ghost-story author. But the author's country home has its own ghost story, which will certainly come back to haunt Lily. Bob Balaban and Lucy Boynton will also star in the drama, written and directed by Osgood Perkins.

The drought is over: Jamie Dornan will be returning to your screens shortly. Variety reports that Netflix picked up wartime thriller Jadotville to premiere in 2016, though the specific release date is still unknown. Dornan plays real-life Commander Patrick Quinlan, an Irish U.N. fighter under siege by Congolese troops. Historical spoiler alert: He ends up winning without losing a single man.

Christopher Guest, the man who brought you This Is Spinal Tap and Best In Show, among other amazing mockumentaries, is back and tackling the pro sports world. The plot centers around the 8th World Mascot Association Championships, which already sounds hilarious. The Hollywood Reporter notes that his usual favorite actors, including Jane Lynch and Parker Posey, were in talks to join the cast. The release date hasn't yet been announced.

You know what you're getting with this one. Paul Reubens teamed up with Judd Apatow to bring back the iconic kids' character Pee-wee Herman back to screens everywhere. Here's the plot, according to Netflix: "A fateful meeting with a mysterious stranger inspires Pee-wee Herman to take his first-ever holiday in this epic story of friendship and destiny." The delightful character comes back March 18.

Fresh from hosting the Golden Globes, Ricky Gervais is heading to Netflix, where he's producing, directing, writing, and starring in Special Correspondents. But Eric Bana plays the main character, a struggling journalist who fakes war reports from above a restaurant in Queens. Gervais, Vera Farmiga, and America Ferrera also appear in the movie, which starts streaming on April 29.

Variety reports that Netflix bought the rights to this dramedy starring Ellen Page as a young drifter who steals a baby from a neglectful mother. Allison Janney also plays a woman who thinks she's the baby's grandmother. The movie is directed and written by Sian Heder, who was a writer and producer on Orange Is the New Black.

'The Fundamentals of Caring'

Netflix also snapped up this road-trip movie, which stars Selena Gomez alongside Paul Rudd's character Ben, who becomes a caregiver for an 18-year-old with muscular dystrophy. They hit the road and run into Gomez, who plays a woman named Dot. It was reportedly one of the hottest deals before the Sundance Film Festival, where it will premiere.

This movie takes aim at the dark world of college fraternities. The plot follows a pledge who has to choose between defending his fraternity, which is committing violent hazing, or standing up for what's right.

Netflix has snagged a huge name for its 2016 lineup: Brad Pitt, who is producing and starring in War Machine, which doesn't have a release date yet. Pitt will play General Stanley McChrystal, a "rock star" military leader who commanded the U.S. effort in Afghanistan until derogatory comments about President Obama forced him to resign. The movie, which is reportedly going to be a satirical comedy, will have a massive budget, at least for Netflix. CEO Ted Sarandos forked over $60 million to secure the rights to the movie, according to The Hollywood Reporter.

This content is created and maintained by a third party, and imported onto this page to help users provide their email addresses. You may be able to find more information about this and similar content at piano.io
Advertisement - Continue Reading Below
More From New On Netflix 2021: What To Watch Now
The Locations in 'Who Killed Sara?' Are Gorgeous
Get in the Spirit By Streaming a Holiday Movie
Advertisement - Continue Reading Below
Classic Movies You Can Stream on Netflix Now
What Happened to the 'Chicago 7' After the Trial?
The Saddest Romance Films on Netflix
The Scariest Movies on Netflix
Fans Are Clamoring for a Second Season of 'Away'
The Best Halloween Movies on Netflix
Meet Your New Favorite Dating Show
The Best Romantic Movies for Every Vibe