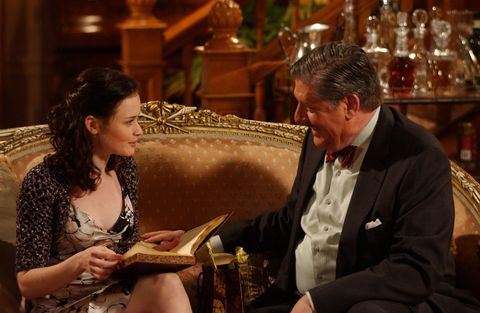 Much like Gilmore Girls is nothing without its rapid-fire pop culture references, Rory is nothing without her trusty booklist. Whether she's poring through Joan Didion or eye-rolling at Jess Mariano mansplaining Howl, Rory is literally never without a novel.

Seriously, guys, this was her graduation speech: "I've been a resident of Faulkner's Yoknapatawpha County, hunted the white whale aboard the Pequod, fought alongside Napoleon, sailed a raft with Huck and Jim, committed absurdities with Ignatius J. Reilly, rode a sad train with Anna Karenina, and strolled down Swann's Way."

So yeah, girl is obsessed with reading. A whopping 339 books appear throughout the course of Gilmore Girls' seven seasons, and literature is so central to Rory's character in particular that The WB (may it rest in peace) provided fans with her reading list. Due to the fact that she's the coolest teen ever, Rory's list spans everything from Bel Canto to The Bell Jar, and we're revisiting it below.

1. Little Women by Louisa May Alcott

2. Sense and Sensibility by Jane Austen

4. The Kite Runner by Khaled Hosseini

5. The Five People You Meet in Heaven by Mitch Albom

7. Balzac and the Little Chinese Seamstress by Dai Sijie

9. Autobiography of a Face by Lucy Grealy

11. The Secret Life of Bees by Sue Monk Kidd

12. The Lovely Bones by Alice Sebold

13. The Nanny Diaries by Emma McLaughlin and Nicola Kraus

17. The Scarlet Letter by Nathaniel Hawthorne

19. The Picture of Dorian Gray by Oscar Wilde

22. A Tree Grows in Brooklyn by Betty Smith

24. Flowers for Algernon by Keyes

25. The Story of My Life by Helen Keller

26. The Awakening by Kate Chopin

27. The Diary of a Young Girl by Anne Frank

29. The Strange Case of Dr. Jekyll and Mr Hyde by Robert Louis Stevenson

31. Crime and Punishment by Fyodor Dostoevsky

36. The Bell Jar by Sylvia Plath

37. The Metamorphosis by Franz Kafka

38. The Adventures of Huckleberry Finn by Mark Twain

39. Death of a Salesman by Arthur Miller

40. The Song Reader by Lisa Tucker

41. Lord of the Flies by William Golding

42. The Curious Incident of the Dog in the Night-Time by Mark Haddon

43. My Sister's Keeper by Jodi Picoult

45. Unless by Carol Shields

46. A Confederacy of Dunces by John Kennedy Toole

48. The Namesake by Jhumpa Lahiri

50. Holidays on Ice by David Sedaris

51. Me Talk Pretty One Day by David Sedaris

53. The Shadow of the Wind by Carlos Ruiz Zafón

54.The Red Tent by Anita Diamant

56. Oryx and Crake by Margaret Atwood

58. The Amazing Adventures of Kavalier & Clay by Michael Chabon

59. The Meaning of Consuelo by Judith Ortiz Cofer

60. Fat Land: How Americans Became the Fattest People in the World by Greg Critser

61. The Bielski Brothers by Peter Duffy

65. My Life in Orange by Tim Guest

69. The Polysyllabic Spree by Nick Hornby

73. Nervous System: Or, Losing My Mind in Literature by Jan Jensen

75. The Devil in the White City by Erik Larson

76. The Song of Names by Norman Lebrecht

77. The Fortress of Solitude by Jonathan Lethem

79. A Month of Sundays: Searching for the Spirit and My Sister by Julie Mars

83. How to Breathe Underwater by Julie Orringer

84. When the Emperor Was Divine by Julie Otsuka

87. The True and Outstanding Adventures of the Hunt Sisters by Elisabeth Robinson

88. The God of Small Things by Arundhati Roy

90. The Opposite of Fate by Amy Tan

91. Just a Couple of Days by Tony Vigorito

94. The Master and Margarita by Mikhail Bulgakov

95. Heart of Darkness by Joseph Conrad

97. An American Tragedy by Theodore Dreiser

98. The Count of Monte Cristo by Alexandre Dumas

99. The Name of the Rose by Umberto Eco

100. The Sound and the Fury by William Faulkner

101. Time and Again by Jack Finney

104. The Hunchback of Notre Dame by Victor Hugo

105. The Lottery by Shirley Jackson

107. One Flew Over the Cuckoo's Nest by Ken Kesey

108. A Separate Peace by John Knowles

113. The Fountainhead by Ayn Rand

115. The Jungle by Upton Sinclair

116. Of Mice and Men by John Steinbeck

117. Uncle Tom's Cabin; or, Life Among the Lowly by Harriet Beecher Stowe

Mehera Bonner Contributor Mehera Bonner is a news writer who focuses on celebrities and royals—follow her on Instagram.
Advertisement - Continue Reading Below
More From Culture
The Documentaries You Can't Afford to Miss in 2020
'Killing Eve' Season 3 Review: What's Old Is New
Advertisement - Continue Reading Below
A Super Pink Moon is Coming April 7
Pre-Order These Amazing Books Coming Out in 2020
The 8 Best Rom-Coms of 2020
Got 10 Minutes? Here's What to Watch on Quibi
We Could Be Getting More 'Tiger King'
HBO Is Making Iconic Shows & Movies Free to Watch
Tim Gunn & Heidi Klum Also Wear PJs to WFH
'Parasite' Is (Finally!) Coming to Hulu