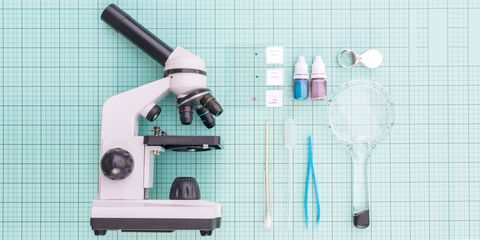 I used to blissfully believe that genetically designing babies belonged in the realms of science fiction—along with anti-aging pills, an elevator to space, and Trump running for President. But science has moved at ridiculous speeds in the last few years. Before I began investigating this topic four months ago for tonight's episode of VICE, Unnatural Selection, I believed genetics should be left to sort themselves out—either by natural selection or divine hand.

Now I'm not so sure. And in a couple decades' time, I'm not convinced anyone else will be sure either.

A new gene editing technology called CRISPR Cas-9 has transformed the field of biomedical research into something that five years ago was a scientist's wet dream.

There is much to freak out about.

CRISPR Cas-9 is a radically precise gene-editing tool that allows DNA to be broken, moved, repaired, and modified. It's cheap, easy, efficient, and works on any living organism. Needless to say, everyone from scientists to students are busy experimenting. For as little as $150, you can purchase the basics (which is essentially a syringe and the Cas-9 protein that targets the DNA itself) necessary to alter the genetic structure of anything from a butterfly to a human embryo.

At China's National Resource Center for Mutant Mice in Nanjing, we saw over 400,000 mice, many of which had been CRISPR-edited to test whether certain genes correlated with conditions like liver disease, diabetes, visual impairment, obesity, and even jet lag. In the genotype and phenotype testing rooms, mice were having heart rates, blood pressure, and BMI monitored, as well as their hair thickness, appetite, and energy levels carefully scrutinized to see how they sized up against non-edited mice. Similar studies are being carried out across the globe—a British researcher just received a landmark approval to bring this technology to human embryos.

There is much to freak out about. As humans, we could be entering an age free of genetic diversity and full of genetic haves and have-nots (something many would argue our world already suffers; aren't the rich already more beautiful, smarter, more #blessed?) We may also expect to experience extreme competition. If you've ever felt pressure to look or dress or be a certain way, imagine the dilemma when those around you begin making the next Einstein or Michelangelo or Kardashian, while you're there rolling your genetic dice and praying. (Consider also that once that genetically flawless kid is born, they'll likely feel even more pressure to live out their parents' dreams, given that so much has already been invested into ensuring them.)

These will be the conundrums of the future, but we're not quite there yet. We have a little hurdle called hereditary disease to sort out first.

I recently had my DNA sequenced and analyzed by geneticist George Church, who informed me of a rare pancreas disease of which I'm a carrier for. This means that if my partner also happens to be a carrier, our children stand a solid chance of suffering a rare and painful disease. If that were the case, I'm not ashamed to admit I'd be first in line to ensure that single mutation is snipped right out of my hypothetical child's genome. When you're faced with evading terminal illness, macro ethics crumble and personal circumstances takes over.

Inevitably, as we see perfectly normal, disease-free babies born through gene editing techniques, society will begin to come round to the idea. There is a precedent for this: IVF.

The first "test tube baby," as she was referred to in the press, Louise Brown, was born 38 years ago when IVF was still deeply controversial. Back then, Brown's parents and fertility doctors received a torrent of hate mail. Now, a "record number" of women are using IVF to conceive and no one blinks an eye.

Hereditary diseases are an easy call, but it seems unlikely that's where we'll collectively draw the line. As demand increases, the baseline for what's acceptable will decline, with requests creeping in to rid the genome of borderline diseases like autism or the tendency to develop allergies. Soon, non-medical traits like larger muscles or freckles or killer legs will roll in, too.

Despite the warning signs, this could also be the greatest opportunity for mankind. If we are educated enough to respect diversity rather than kill it, we could be breeding children smart enough to solve world climate change, tall enough to flood the NBA with slam-dunking legends, and innovative enough to bring Bowie back. And who could blame us for wanting to try?

The VICE segment "Unnatural Selection" hosted and co-produced by Isobel Yeung debuts tonight on HBO at 11pm, kicking off the show's fourth season.