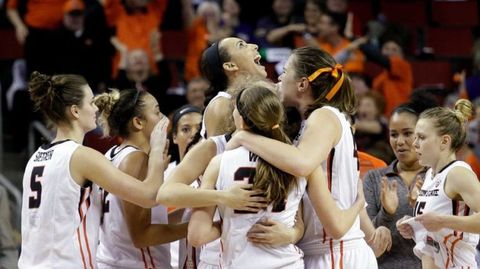 Whether you have all bets placed on your Final Four picks or you're still hung up on that one miss on your Bachelor bracket, you need to know something important about the 2016 NCAA Basketball Championships happening this week: not a single team in the men's or women's division has a woman as its head coach. And we're not the only ones who noticed it: even ESPN is at a loss about the persistent lack of diversity among collegiate coaching staff.

To make sense of this literal madness, here are some important facts about the disheartening decline in female coaches (and a few shining stars!) in the NCAA:

1. Female head coaches make up 58.6 percent of NCAA Women's Division I basketball, and women's basketball is the only collegiate sport with a majority of women coaching. However, these numbers are not so impressive when compared to the number of women coaching men's D-I basketball: 0.

2. The only woman to have a coaching stint with an NCAA Division I men's basketball team is Teresa Phillips, who also happens to be the athletic director at Tennessee State University. Phillips stepped in to lead the Tigers for just one game in 2003, after both the head coach and later the assistant coach were suspended after a series of compromising incidents.

3. The issue lies in many more sports than just basketball: NCAA sports overall have ironically seen a deficit in female coaches since the passage of Title IX. And the number continues to decrease—in 1972, 90 percent of all NCAA college women's coaches, in any sport, were female. This number plummeted to 40.2 percent in 2015.

4. Women are fighting their way onto coaching staffs around the country by assistant coaching, but they only make up 37 percent of assistant coaches across all D-I sports.

5. Another leadership role that allows women to shine is a collegiate program's athletic director, but just 10 percent of Division I athletic directors are female.  Because schools' athletic budgets rely so heavily on football revenue, colleges and universities often consider women too "inexperienced" with this sport to head up an entire collegiate athletic program.

6. Pat Summitt, coach of the University of Tennessee Lady Volunteers for 38 years, from 1974 to 2012, has the most career wins—a whopping 1,078—of any Division I basketball coach in the NCAA, surpassing Mike Krzyzewski, head coach of Duke University men's basketball.  She was the first NCAA basketball coach, period, to reach 1,000 career wins, not to mention her 8 NCAA Championships. On top of it all, she went public about her battle with from early-onset Alzheimer's disease in 2011 and published a memoir, Sum It Up, about her coaching triumphs and personal health struggles in 2013.

7. Don't even get us started on the wage gap that pervades almost every profession, not excluding college coaching. The highest paid male coach in collegiate sports is Nick Saban, head football coach of the University of Alabama Roll Tide, who earns a jaw-dropping $7 million a year, while the highest paid female coach in the NCAA, Sherri Coale of the University of Oklahoma Sooners women's basketball team, earns just one-seventh of that per year. Come on now.

8. Superstars do exist, in the form of Becky Hammon of the San Antonio Spurs, the first woman to assistant coach in the NBA, and now Nancy Lieberman of the Sacramento Kings, who credits Hammon as one of her inspirations for making it to the NBA as a coach.

Becky gives a shout-out to both the #Leanintogether partnership for gender equality in the home, and  "Coach Pop," AKA Spurs head coach Gregg Popovich,  who she says "sees her genderless...as a person who knows basketball."

And she's so right. Coaching shouldn't be based the gender of the coaches or the athletes, but on the expertise of the game and their ability to motivate a team to work together to the best of its ability. A few standout women are making incredible strides on the collegiate and professional levels, but there's no reason a woman can't coach a team of men or women to a national championship victory in any sport.

This content is created and maintained by a third party, and imported onto this page to help users provide their email addresses. You may be able to find more information about this and similar content at piano.io
Advertisement - Continue Reading Below
More From Culture
Zendaya Shared Pics From the Set of 'Euphoria'
Are Chloe and Mitchell from 'The Circle' Dating?
Advertisement - Continue Reading Below
Get to Know DeLessa From 'The Circle'
The Best Korean Dramas to Get You Hooked
Did Beyoncé Really Meet Selena?
How Selena's Sister Honors Her Memory
Get to Know Courtney From Season 2 of 'The Circle'
Meghan Will Release Debut Children's Book in June
Celebrate AAPI Heritage Month With These Leaders
Historical Films to Stream If You Loved 'Hamilton'