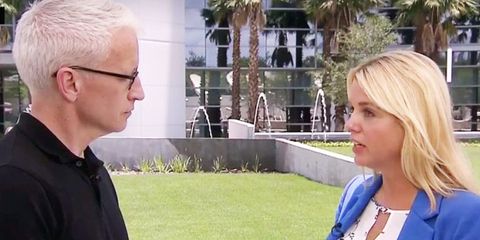 Anderson Cooper made sure not to avoid the tough questions in a new interview with Florida State Attorney Pam Bondi. In the aftermath of the Orlando massacre, Bondi has recently championed the rights of the LGBT community—but on the air yesterday, Cooper dove right in on calling out the Republican's hypocrisy, considering her track record of fighting gay marriage legislation in the state of Florida.

"I saw you the other day saying that anyone who attacks the LGBT community—our LGBT community, you said—will be gone after to the full extent of the law," Cooper said during his live interview with Bondi. "I talked to a lot of gay and lesbian people here yesterday who are not fans of yours and said that they thought you were being a hypocrite, that you for years have fought—you've basically gone after gay people, said that in court that gay people simply by fighting for marriage equality were trying to do harm to the people of Florida."

In May 2014, Bondi filed a brief in which her office argued that "disrupting Florida's existing marriage laws would impose significant public harm." Earlier this month, NBC News reported that Bondi's fight against marriage equality would cost Florida taxpayers around $500,000.

Bondi's fight against marriage equality would cost Florida taxpayers around $500,000.

Bondi explained that she was upholding the state's constitution, and that she has "never said I don't like gay people." She asserted that her recent support is about humans and Florida citizens, not about gay rights. But Cooper didn't buy it.

"The hotline that you've been talking about on television, which allows family members and spouses of the dead to get information, which is incredibly important, and I appreciate you talking about on the air," Cooper said, "had there been no gay marriage, no same-sex marriage, you do realize that spouses—there would be no spouses, that boyfriends and girlfriends of the dead would not be able to get information and would not be able to visit in the hospital here. Isn't there a sick irony in that?"