Ryan Lochte has been mired in drama since it was revealed his story about being robbed at gunpoint while at a Rio de Janeiro gas station with three fellow athletes—Gunnar Bentz, Jack Conger and Jimmy Feigen—was not entirely truthful.

According to Brazilian authorities, Lochte and his teammates were intoxicated and destructive of the gas station property, prompting an armed security at the business to demand money for the damages. A Brazilian judge then ordered the passports of the involved athletes to be seized, but not before Lochte was able to fly back to the United States.

Now, back on his home turf while his teammates are detained, Lochte speaks out about the incident for the first time since it all unraveled in an exclusive interview with NBC's Matt Lauer. The first part of the two-part interview aired on Saturday night during NBC's Nightly News.

"Whether you call it a robbery, whether you call it extortion, or us paying just for the damages—we don't know," Lochte told Lauer. "Like, all we know is that there was a gun pointed in our direction and we were demanded to give money."

When confronted with an earlier admission he'd made saying that none of his teammates had caused any of the destruction, Lochte was contrite.

"I'm taking full responsibility for it, because I over-exaggerated that story and if I'd never done that we wouldn't be in this mess… It was my immature behavior."

The second part of the interview will air on Monday, Aug. 22 on NBC's Today. 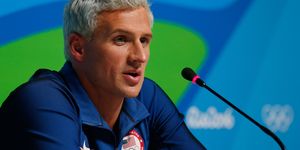 23 Hilarious Tweets About #LochteGate
This content is created and maintained by a third party, and imported onto this page to help users provide their email addresses. You may be able to find more information about this and similar content at piano.io
Advertisement - Continue Reading Below
More From Culture
Who's the Rumored New 'Bachelorette,' Katie T.?
The Best Documentaries of 2021 (So Far)
Advertisement - Continue Reading Below
Could 'WandaVision' Get a Second Season?
The Reality Shows You Should Be Watching in 2021
Taylour Paige's Star Is Rising
Taylor Swift Fans Outraged over Lame, Sexist Joke
The Best Bollywood Movies Ever
Films That Earned a NC-17 Rating (Thanks to Sex)
'Murder Among the Mormons': Who Is Mark Hofmann?
Tia Mowry Has a Gorgeous Bookshelf in Her Bedroom