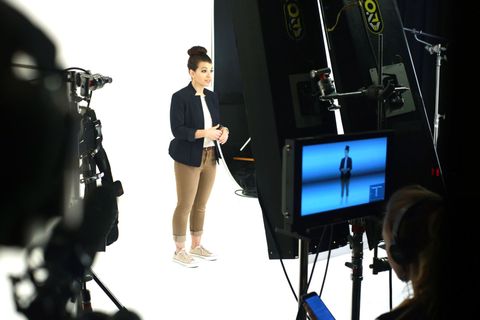 When Anita Sarkeesian launched a Kickstarter to fund her video series Tropes vs. Women in Video Games in 2012, her $6,000 goal was funded within 24 hours. She went on to raise 25 times that amount—and to become the target of #GamerGate's sexist backlash as a result.

But that didn't stop her.

Now, four years later, Sarkeesian is back with a new, equally awesome project: Ordinary Women: Daring to Defy History, a five-episode series where each episode tells the story of one female leader or innovator who has been largely left out of the history books.

Sarkeesian filled Marie Claire in on the series, what she's learned from creating Tropes, and how online harassment is just a continuation of the treatment women have been dealing with for centuries.

Marie Claire: What inspired you to create the Ordinary Women series?

Anita Sarkeesian: When I knew that this was going to be the last year of the Tropes vs. Women in Video Games series, I was looking to what the next project would be. I came back to this idea of telling the stories of women who aren't in all of the history books. Their names are not up there next to male names that we've know since we were little kids. Ching Shih, for example, was a pirate commander from the late 1800s to the early 1900s. She was one of the most fearsome pirates, why is her name not included when we list the names of great pirates like Blackbeard?

MC: How did you choose the five women featured?

AS: My writer and I sat down and wrote a huge list of names of women to consider. It was really important to us to have a broad range of women from across generations and cultures. We didn't want to make it Western-focused, we wanted to make sure it was international and that it had an intersectional lens.

I hadn't mentioned, but Ching Shih is a pretty villainous character. She is a real person, but she was a pirate commander, so she probably murdered a lot of people. I don't imagine she was a very good person. So you might get a bit confused as to why you would put her on a list with Ada Lovelace and Ida B. Wells. I really wanted to explore a range of women who aren't necessarily perfect, heroic women. I wanted to series to influence creative people to include more women in their work, especially historic works. Here are examples of real women who have done real things: good, bad, and in between. We're expanding not just the definition of the female or feminine hero, but also villains and more complex, nuanced female characters. Too often I hear men say, "I don't know how to write women." Here you go, here are five incredible women you can use to inspire your own stories.

MC: So, incorporating historic women into creative work is one goal of the series. What else do you hope Ordinary Women accomplishes?

AS: The other goal is I really want to help write these women back into history. I want these to be names that young girls and boys and kids of all genders grow up knowing. It shouldn't just be when you take a feminist class in college, if you happen to do that. I hope this is fun and engaging for folks to watch.

MC: Is the thought that more kids will go on YouTube and watch these videos, or is it that the videos will help the women end up in more traditional text books and educational materials?

AS: My primary focus is getting individuals to watch the series based on that sort of dichotomy you presented. I also realize that a lot of our work is used educationally. My previous videos have continued to be used in classrooms. They've made it into curriculums, and we are developing our own curriculum around the series itself that educators will be able to use as well. So I'm hoping it is a combination of those things.

MC: You raised over $200,000 for the series, which is a lot more than when you raised funds for Tropes vs. Women in Video Games. What was the fundraising process like?

AS: A little bit of context, when I launched the Kickstarter for Tropes vs. Women in 2012, I was only asking for $6,000, and we raised 25 times that amount because there was a lot of attention paid to that Kickstarter. This time it was much more intentional. We went into it saying it's going to cost this much, this is how much we need to make it happen.

They were both extremely stressful and challenging but in vastly different ways. I love crowdfunding. I find crowdfunding to be one of the most ethical ways to continue doing the work that we do because the idea is that I want my videos to be free and available to everybody, and that's why I use YouTube and online platforms. For me, if folks who are watching it can pitch in a bit to help cover the cost for creating this work, that's great, but I don't want folks who can't helped to not have access to it. I really like the crowdfunding model in that regard.

MC: The animations and details like your outfits are specific to each woman's time period. How did you conceptualize all the aesthetics in the videos?

AS: A lot of discussion and work. The animators pitched me the idea of making each episode distinctly different to each of the women, and we sort of took that idea and ran with it. I really loved it. They're not long videos, but they try to get at the core feeling of their spirit in some way, even if that sounds cheesy.

I didn't want to dive into time period costuming that was culturally appropriating, so we worked with a stylist to design the outfits that are inspired by these women, or by the visuals that we have of these women. With the animation itself, I don't even know how to explain the process. It's still happening. It's a lot of back and forth, and a lot of historical work has gone into it in terms of making sure that we are as accurate as we possibly can be.

MC: What have you learned from creating and starring in Tropes vs. Women that you are bringing to this series, or building off of?

AS: Everything. They are so distinct. Tropes was made in my studio, it's a small, scrappy studio. I film it myself. It's the same fabric backdrop the whole time. It's very low budget in terms of film production, whereas Ordinary Women was shot on a soundstage with a professional crew and a professional animation studio creating everything. I just got to be the host because I had a producer and a crew and they handled everything, so I didn't have to run around playing multiple roles, which I've never been able to do before. I got to focus on my performance – learning how to perform is something I've been working on both personally and professionally.

The other thing is that it's really hard to separate out the harassment from everything we do. When we started creating Tropes, we were hyper-aware of the intense scrutiny, the intense harassment, and the intense pressure to do something meaningful given the attention both positive and negative. That's carried over in terms of making sure that I produce the best work that I can, that's the most accurate, the most sensitive and engaged.

MC: In the promo video you made to launch the campaign, you say viewers might be surprised by how the women's struggles are still relevant today. What ways did you find that to be true?

AS: The struggles women face today are simultaneously very, very old and very new. The struggles of dealing with online harassment is the same harassment that women have been dealing with, it's just a new medium in which it's happening. And when we look at these historical women and what they've gone through, it's shocking to recognize some of our own experiences in theirs. When you look at someone like Ada Lovelace who is the first computer programmer, during her lifetime doctors said that was really sick because she was trying to use a masculine kind of brain that she didn't have. Today, her legacy of being the first programmer is stil disputed. During her lifetime and also contemporarily, she is constantly undermined.

MC: What was your favorite part about creating Ordinary Women?

AS: That's really hard to answer because I really loved it all. It is so different from any other project I've ever worked on, and it's been really exciting to work on a collaborative, creative team where we got to bounce ideas back and forth and figure out the best one. I'm really thriving and enjoying being a part of a really vibrant creative team and doing creative work.