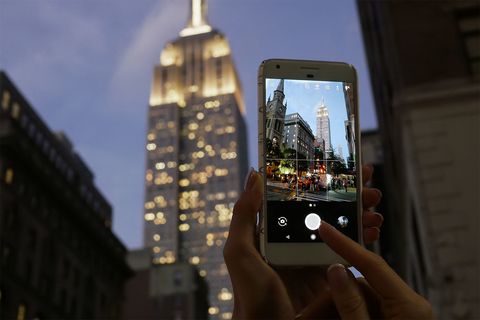 ICYMI: Google's Pixel is finally here and the internet is buzzing over whether or not this might be the best phone, ever. Given that this is the first one that Google designed start to finish, they did a damn good job. 🙌

And that's because if you're a busy person, and I bet you are, there's a lot to love. I wrote the review of the iPhone 7 Plus smack dab in the middle of New York Fashion Week. This time, I switched to the Pixel in between a six-cities-in-less-than-a-month tour and quite literally in an airport. While I wouldn't usually recommend switching phones on the go, this one was a breeze and it did what it was supposed to do: made my life easier.

For starters, it only took 10 minutes to copy over my contacts, calendar, and some of my photos thanks to the handy iPhone to Pixel cable that comes in the box. I was super impressed with the 7 hours worth of charge I got in 15 minutes (goodbye premeditated charge sessions, hello I'm already late so just work with me on this one, phone). I took a ridiculous amount of pretty awesome, Instagram-worthy photos, if I do say so myself, with no fear of running out of space (there's unlimited storage for photos and videos). And Google's Assistant made every other "Assistant App" look like a kindergartner's drawing next to a Rembrandt. So let's dive right in.

Every smartphone ever made has the "best camera ever," according to their own marketing department. So when a company leads with that, I urge you to throw on some headphones and blast Public Enemy's "Don't Believe The Hype," because of course they think they're the best. But this time, you don't have to take Google's word, and you don't have to take ours either. You can take DxOMark's word, the independent camera testing service that just rated the Pixel camera as the best ever. Bottom line here, it takes really vibrant photos in all sorts of light and double-tapping the power button will launch the camera from any screen, making it near impossible to miss that magic moment. But here's what else I love about the camera...

Flick on, flick off is the name of the new selfie game now that Pixel let's you switch between selfie and front-camera modes with, quite literally, the flick of the wrist. Simply flick your phone back-to-front twice and viola.

Okay, this might not be new, but it's still pretty cool and you might not know about it. Lens Blur mode let's you get those super artsy looking shots with a blurred out background in no time at all. Chose it from the menu on the top left, start the capture, move the camera up slightly, then end the capture. By giving the camera multiple viewpoints of the same scene, it can generate a "depth map" that allows it to apply blur proportionally to the distance from the focus point. What does this mean? You've got access to what will probably the newest photo trend on Instagram. Thank you, Google.

Truth be told, the AUTO mode on the Pixel is pretty fantastic. It does a great job at making behind-the-scenes adjustments to all sorts of shots and scenarios, but if you like to be in control, check out the cloudy, sunny, fluorescent, and tungsten settings on the top menu. These determine how blue or red your photo will be, so if you're trying to capture a gorgeous sunset, for example, you might want to tap cloudy and see what happens.

Working title: Google Assistant Me Locate A Nearby Cafe That Has Wifi So I Could Write The Article You Are Now Reading
Jonno Hill

If there's one thing that Google can't really fail at, it's organizing lots and lots of information in *actually* useful ways. So it's no surprise then that their assistant knocked it out of the park. It took only three seconds to set up but kept me entertained for hours. Ask anything like, "who was the first lady in 1964?", "how do you make a hot toddy?", or "what is Beyoncé's top selling album?" and you will get all the answers you need—but note that it is especially handy when you really do *need* something, like locating a cafe nearby that has wifi. If that's not enough to sell you on it, it's also the only assistant that you can activate by just saying "OK, Google" and then giving it a command. Case in point? If you say "OK Google, take a photo," it will count down from three and take the shot, so you don't even have to press a button.

One more thing before I drop the mic. Live Cases. They might not be new, but there's some really exciting partnerships that came along with the launch of the Pixel. Namely collaborations with new artists like FriendsWithYou, FAILE, Justin Maller, photographer and print artist Gray Malin, and astronaut Chris Hadfield (there's a few others coming too that I'm sworn to secrecy about but stay tuned because they're good, really good).