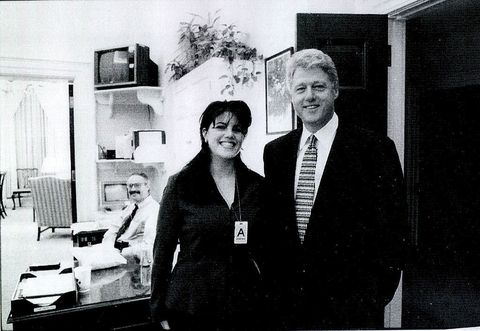 The People v OJ Simpson set a very, very high bar for future seasons of Ryan Murphy's FX anthology series American Crime Story, and it'll be at least another year before the Hurricane Katrina-themed second season hits screens. But since the 1990s are the messy decade that just keeps on giving, we now have confirmation that a future season of the show will tackle the scandal surrounding President Bill Clinton's affair with White House intern Monica Lewinsky.

Per The Hollywood Reporter, Murphy has secured the rights to the book A Vast Conspiracy: The Real Sex Scandal That Nearly Brought Down a President, authored by Jeffrey Toobin—who also wrote the book behind The People v OJ. Murphy and his co-producers are apparently keen to fast-track the Lewinsky-themed season, and are already meeting with potential actresses for the roles of Lewinsky and her colleague Linda Tripp, who exposed the affair. You can expect the show to chronicle the affair, its fallout, and Clinton's subsequent impeachment hearings and acquittal by the Senate.

The third season of American Crime Story will chronicle the 1997 murder of fashion designer Gianni Versace, although depending on how fast-tracked the Monica Lewinsky season really is, it could be pushed up to air before Versace.