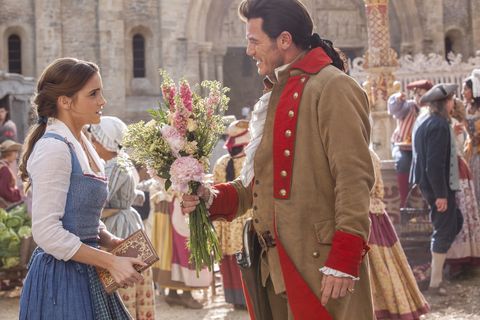 We saw Beauty and the Beast, and guys. Guys. We are literally having to physically restrain ourselves from writing this article in all-caps with a million exclamation marks—that's how good it was. Actually, screw it: BEAUTY AND THE BEAST WAS GLORIOUS!!!!!!

But now that we've gotten that out of the way, let's discuss how Disney's live-action remake is different than the original. Because even though the plot is essentially the same (girl meets beast, beast locks girl in a castle with a humanoid candle—you know the drill), there are some key differences to break down. Ya ready? (Note: Mild spoilers within.)

1. The Prince has a very strong face beat—complete with colorful eyeliner. Truly, he could have moonlighted as a YouTube makeup vlogger if that shady enchantress hadn't cast a spell on him. Alternate title: Beauty and the Vlogger.

2. Speaking of the Beast, we finally know why he's the emo Bright Eyes of Disney movies. Turns out his mom died when he was just a child, meaning he didn't have any strong women in his life. Lesson learned? Women make everything better and without us you might get cursed and turn into a giant monster. Just saying.

3. Oh, and Belle has a backstory, too. Turns out her mom also died (of the plague—that's right, Disney just got real dark) when she was a baby, and her dad had to whisk her out of Paris as a result. By the way, we find this out when the Beast and Belle read a magical book that transports her to the apartment she grew up in.

4. There are a slew of new musical numbers, and frankly we're not sure how we feel about them. Not only does Belle's dad get a chance to sing his heart out, the Beast pulls a Drake and spills his emotions multiple times. Cool, but let's be honest: we're here for the classics.

5. The movie is way more diverse. Not only does Beauty and the Beast feature several interracial relationships, Belle's friend, the bookshop owner, is black. This makes a welcome change from the white-washed world of the original.

6. Despite being in unrequited love with Gaston throughout the film, Le Fou gets the happy ending he deserves with a drag-wearing reformed henchman. Disney should certainly be applauded for finally featuring LGBTQ representation, but don't be surprised if critics fault said representation for being stereotypical...there's definitely a lot to discuss.

7. Speaking of representation, Belle is a full-fledged feminist. Not only is she an inventor, she helps other girls in the town learn to read despite opposition from #The Patriarchy, puts Gaston in his place all kinds of ways, and—most importantly—tries to escape from the Beast by throwing a makeshift rope out her bedroom window. Belle's resignation to living that Stockholm Syndrome life was a huge problem in the original movie, so this is a welcome change.

8. There's so much gold in the Beast's castle. We were seriously thinking he might morph into Donald Trump upon becoming human again.

9. Belle spends most of the movie wearing what we believe might, in fact, be TOMS. Someone explain.

10. Disney *kinda* addresses how insane it is that Belle is in love with what is essentially a large dog. Because guys, there's a word for that: beastiality. (Pun very much intended.) And sure, the movie can't make too much fun of itself, but there are a few meta moments—including Belle asking the Beast to grow a beard after he's turned back into a human.

11. Did you ever feel like the Beast kinda, IDK, overreacted by imprisoning Belle's dad? Disney tried to explain his unlikable decision by a) having Papa Belle steal a rose from the Beast's garden, and b) having the Beast go on a moody rant about how if *he* has to be punished for eternity, everyone else should be too. Typical white male. Oh wait.

12. Lumière is creepy AF. Look, we love him no matter what, but there's something about this face that will haunt our dreams for years to come:

13. And finally, the enchantress gets way more screen time. In fact, after cursing the Beast at the beginning of the film, this meddling lady hangs in the local village pretending to be a homeless person, and ends up saving Belle's father after Gaston leaves him for dead. Which, cool/fine/whatever—but still doesn't explain 1) why she's so obsessed with teaching the Beast a lesson, 2) why she wouldn't at the very least hook herself up with a fancy apartment to wait it out, and 3) why she curses the Beast's innocent servants into terrifying talking objects.

Watch Beauty and the Beast in theaters on March 17.