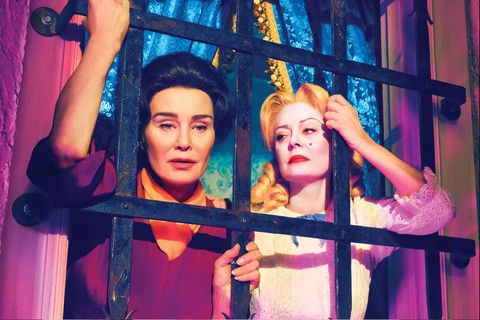 In the event that you didn't watch Sunday night's premiere of Feud: Bette and Joan (please amend that immediately, by the way), the show had a huge OMG moment when one of the characters dropped the C-word, AKA one of the worst and most unacceptable things you can call a woman, and a word you very rarely hear on television.

"We felt that it wasn't gratuitous," Feud showrunner Tim Minear explains to The Hollywood Reporter. "It was gratuitous coming from the mouth of the character, but it wasn't gratuitous in terms of the story that we're telling. One well-placed epithet like that is like a bracing, toss of cold water in the audience's face and it says something. Not if you're dropping it every five seconds. So that's why it's there; it's there because that's the ugly soul that we're exposing a little bit."

As THR notes, the c-word isn't often used on TV—even on premium channels like HBO (though it's been used on Sex and the City). However, Feud airs on FX, a basic cable network—which means its inclusion of the word is slightly more taboo. The show likely got away with it thanks to it's 10 p.m. time slot, the fact that it isn't a broadcast network, and the fact that Ryan Murphy is an unstoppable force of nature in the entertainment world.

That said, it's certainly jarring to hear this word on television. But while some might be offended, you cant deny that Feud is portraying an accurate depiction of sexism in Hollywood.

Mehera Bonner Contributor Mehera Bonner is a news writer who focuses on celebrities and royals—follow her on Instagram.
This content is created and maintained by a third party, and imported onto this page to help users provide their email addresses. You may be able to find more information about this and similar content at piano.io
Advertisement - Continue Reading Below
More From Culture
The Sexiest New Movies of the Year
A Look Back at Princess Anne's Life in Photos
Advertisement - Continue Reading Below
Where Is the Cast of 'Gilmore Girls' Now?
'The Bachelor' Is Back!
Who Is "Queen" Victoria on 'The Bachelor'?
Matt James' 'Bachelor' Cast: Everything We Know
Get to Know Serena Pitt From 'The Bachelor'
The Best Lesbian Movies Streaming on Netflix
Listen to the Best New Love Songs of 2021 (So Far)
Who Is Christine Chiu on Netflix's 'Bling Empire'?