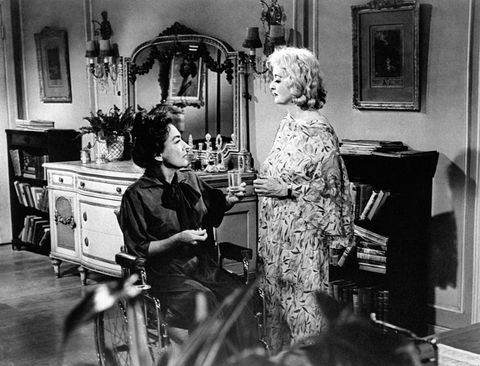 Does Empire not have enough catfights and fabulous outfits for you? Does RuPaul's Drag Race not have enough camp factor? And do you need at least two Oscar-winning actresses to make a TV show worth your time? Oh, do I have a show for you.

The New York Times reports that Ryan Murphy, who already has two anthology shows under his belt (American Horror Story and American Crime Story), will add a third with Feud, which will take on a real-life rivalry every season. The first season of Feud will showcase the bitter battle between iconic movie stars Joan Crawford and Bette Davis. Jessica Lange will play Crawford and Susan Sarandon will play Davis, because the television gods are good to us.

Their feud is known as one of the most legendary in Hollywood. It reportedly started over a man, but kept going even after he was out of the picture. Throughout their lives they deliberately provoked one another and trashed each other's reputations, and threw so much shade you could barely see the sun in Hollywood. It got so bad that after Crawford died, Davis infamously cracked, "You should never say bad things about the dead, you should only say good…Joan Crawford is dead. Good."

The plot will center around the production of Whatever Happened to Baby Jane?, which was nominated for five Oscars. Alfred Molina will play director Robert Aldrich, Stanley Tucci will play studio exec Jack Warner, Judy Davis will play gossip columnist Hedda Hopper, and Dominic Burgess will play costar Victor Buono. Just when you thought Lange and Sarandon would be juicy enough onscreen, Stanley Tucci gets added to the mix. Could this get any more perfect? Yup: Brad Pitt is a co-executive producer. BOOM! Here's hoping he pops in wearing an old-timey outfit at some point.

Sadly, you'll have to wait a little while for this piece of television perfection; they'll film the show this fall and air it on FX in 2017. Here's the original trailer for Baby Jane. Can't you imagine Lange and Sarandon just destroying these parts?