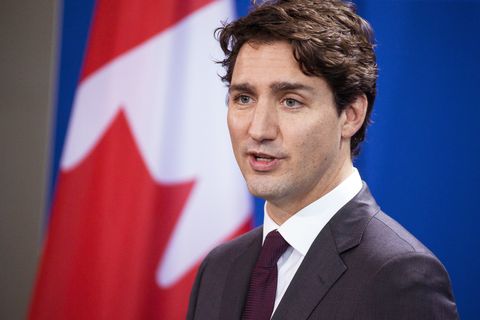 Everyone's favorite Canadian Prime Minister Justin Trudeau addressed Parliament on Wednesday, introducing Malala Yousafzai, who delivered a poised and poignant speech covering Islamaphobia, the refugee crisis, and the importance of educating women and girls worldwide. The youngest person to address the Canadian Parliament to date, Malala was also made an honorary citizen of Canada. "Though, I still require a VISA. But that is another discussion," The 19-year-old advocate joked.

Yousafzai highlighted how excited she was to meet Trudeau (who wouldn't be?!) at the start of her speech, commending him for his positive embrace of refugees, his commitment to establishing the first gender-balanced cabinet, and having women and girls at the center of his development strategy. She also noted how young he is, being the second youngest Prime Minister in the country's history, and the fact that he does yoga *and* has tattoos as contributing factors to his insanely widespread appeal.

It's safe to say that no one is immune to "Trudeau Fever" these days—especially after those Young Trudeau pics surfaced that we're still not over. You can watch the full recap of the address here: