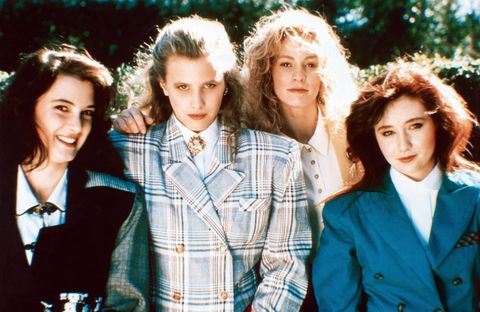 I shop therefore I am.

F*ck me gently with a chainsaw.

These are just a few of the iconic lines from Heathers—the cult classic dark comedy that catapulted Winona Ryder to fame and completely changed the game for teen films. Heathers came out in 1989, but it still has a huge amount of relevance today (hello, themes of outsiderdom and feminism!), and its script basically consists entirely of quotables. But there are still some secrets left to tell. MarieClaire.com spoke to longtime producer Denise Di Novi—whose directorial debut Unforgettable starring Katherine Heigl and Rosario Dawson is in theaters now—and got the scoop on eight things you never knew about Heathers.

Heathers wraps up with Veronica (AKA Winona Ryder) taking Heather Duke's symbolic red scrunchie of power, and inviting school outcast Martha Dunnstock to hang. The two of them walk off into the distance as the film ends—a scene which almost didn't happen. "I really pushed for that," Di Novi says. "I felt like it was a really important message. Otherwise, the movie would have ended the way it already did, but without that little coda. To me, it was like Veronica's redemption."

Speaking of Endings, There Were a Few Alternates

Right before that final coda, Veronica detonates a bomb strapped to her murder-happy boyfriend's chest. He blows up, but the school doesn't. However, things could have been pretty different. "I know [writer] Dan Waters thought of maybe having the high school actually blow up," Di Novi recalls. "Or having a prom in heaven. But I don't think anybody really took those ideas too seriously. Even though the movie is dark, there is a beating heart. Veronica is basically a good person, so the darker alternate endings didn't really make sense."

Winona Ryder's Agent Begged Her Not to Do the Film

Everyone who worked on Heathers absolutely loved it...except for Winona Ryder's agent, who was *not* here for the movie. "Winona's agent at the time literally got on her knees and begged her not to do it," Di Novi says. "She thought it was the most horrible thing ever. Some people were really offended by the making-fun-of-suicide aspect."

Shannon Doherty Was Slightly Out of Place on Set

When asked if anything went wrong on set, Di Novi said everyone got along swimmingly and there was no drama, but Shannon Doherty was slightly out of place: "Shannon Doherty I don't think realized what the movie was that she was in," Di Novi laughs. "She was coming from Highway to Heaven, and she was kinda from a different world. I think she thought we were all weird, and we had some trouble getting her on board with stuff."

The Famous Cigarette Moment Took So. Many. Takes.

Because this movie is epic/flawless, Veronica whips out a cigarette before detonating the bomb—and it lights up in a moment of pure perfection. Ryder was obsessed with making the scene look extra epic, which meant extra takes. "Winona was so exited about that—she never smoked, she was just a kid, and she just thought, 'Ugh, I'm gonna look so cool with all the burnt stuff and the cigarette.' She wanted to get it perfect. It took five or six takes, because we needed that great expression on that face."

The Church Was *Not* Thrilled by That Iconic Funeral Scene

One of the most famous scenes in Heathers takes place at the funeral of two school bullies who are murdered accidentally-on-purpose by Veronica. During the scene, one of the boys' father takes a stance against homophobia, shouting "I love my dead gay son!" And the circa '80s church he shouted in? Not thrilled. "It was a little difficult doing the funeral scene at that beautiful church in Pasadena," Di Novi says. "They were like, 'what the heck kinda movie did we let shoot in our church? Here they're talking about their dead gay son.' I think we told they we were just going to shoot a beautiful funeral scene...I had to talk to the church people about that."

A Bunch of Scenes Were Cut from the Original Script

Dan Waters' original script was over 200 pages (FYI, that's long AF for a script), so naturally some cuts were made—but don't worry, nothing vital. Di Novi explains, "There was a lot more scenes—scenes in the cafeteria, there was a picnic...there were just a lot more in the way of scenes of their lives. It was a low budget movie so we couldn't shoot a 200 page script." That said, there was no doubt that every page of Waters' work was genius: "We all felt like we were working on one of the best scripts that had ever been written."

And no, he didn't give a great performance. "He didn't audition, he did the table read for us, and he really wanted the part. But we did a read to hear the script and we asked a lot of actors as a favor to read. He was a friend of somebody. He sat in the table read and read the part of J.D. I am embarrassed to say that I didn't find anything extraordinary about him at all. He really was not the character that much. He grew into his talents for sure, but he was really nice. Very sweet."

Mehera Bonner Contributor Mehera Bonner is a news writer who focuses on celebrities and royals—follow her on Instagram.
Advertisement - Continue Reading Below
More From Culture
The Best Korean Dramas to Get You Hooked
The Best New Music of 2020 (So Far)
Advertisement - Continue Reading Below
Listen Up: Gripping New True Crime Podcasts
'The Bachelor' Has Already Finished His Season
Unmissable Horror Movies Coming Out This Year
Who Is 'Bachelor' Peter's Mom Talking About?
Sarah Coffin Might Be a 'Bachelor' Frontrunner
Who Is 'Bachelor' Contestant Victoria Fuller?
Meet the Star of 'The Bachelor's ChampagneGate
Jurnee Smollett-Bell Is a Real Life Superhero