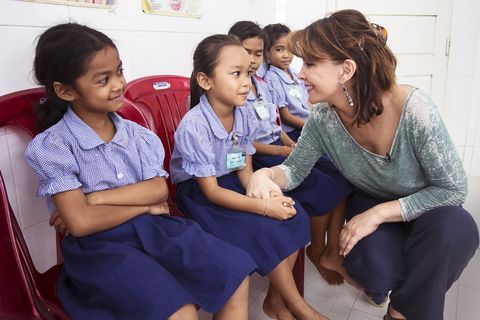 In 2005, Tina Kieffer, then editor-in-chief of Marie Claire France, was on a flight home from Cambodia with an ill 5-year-old girl named Chandara in her arms and an idea forming in her mind: a school for poor girls in Cambodia that would be a refuge from the destitution and child prostitution that still plague the country even decades after the Khmer Rouge's devastating genocide.

Months earlier, Kieffer had been visiting a Cambodian orphanage to donate clothes when she came across Chandara, a weak, crying little girl unable to make eye contact. "I was traveling with my two youngest children," says Kieffer. "After we left the orphanage, I thought about Chandara the whole time during our travels in Cambodia, because I was very upset. She was so sad." Back home in Paris, she checked in and learned that the 5-year-old was sick with a disease that prevented her from being adopted, so Kieffer returned to Cambodia with a medical visa to take Chandara back to France for treatment. She eventually adopted the tiny patient in her care, and in 2005, with the help of Marie Claire, she founded the nonprofit Toutes à l'école, opening a school months later for 92 girls in a rural area 12 kilometers from Cambodia's capital, Phnom Penh. The school's name? Happy Chandara.

Cambodian families send their sons for schooling, and the uneducated girls often turn to prostitution to make money as they get older.

Today, Happy Chandara has 1,200 students and a campus with a primary school; secondary school; gym; dormitory; and vocational, medical, and social centers. As Kieffer explains, Cambodian families typically send their sons for schooling instead of their daughters, and the impoverished, uneducated girls often turn to prostitution to make money as they get older. That's one reason she decided to start the nonprofit; another is that educating women benefits the country as a whole. "Girls become mothers who pass knowledge down to their daughters and sons," she says. In 2009, Kieffer retired from Marie Claire to devote all her time to managing Toutes à l'école from Paris.

At Happy Chandara, personal and academic health are inseparable: The school offers medical and dental care, and also boards more than 130 girls who come from homes that are unsafe or too far away. Last year, Happy Chandara took in Sokunthea, an 11-year-old girl whose father had killed her mother (her little sister enrolled soon after). "Sometimes we see a shadow darkening her eyes, but she still lives the life a child her age should, laughing and playing with her friends," says Kieffer. "Here, the girls find a place to be themselves and grow." They also succeed academically: For the past two years, 100 percent of graduating students have passed the country's national exams.

These achievements take the dedication of the school's entire staff as well as Kieffer's steadfast fundraising efforts, which include partnerships with corporate donors. This month, for example, beauty company L'Occitane and Marie Claire have teamed up to create and sell La Flamme Marie Claire, a verbena-scented candle that will benefit charities focused on educating women. All profits from the candle's sale will be divided among Toutes à l'école; Entrepreneurs du Monde, an NGO that operates microfinancing programs on three continents; and She's the First, a New York City–based nonprofit that helps girls worldwide become the first in their families to complete school.

Kieffer says that with the money raised, Happy Chandara's goals for 2017 are to provide more career counseling to graduating students and expand the school's gym so it can serve as a weekend recreation space for the entire community. "We want to help the girls until they get a job," Kieffer explains. "We are so proud of what they accomplish by the time they graduate, but we can't leave them on the roadside—we want to see them through to a better future."

Purchase the candle here to benefit charities focused on educating women around the world.