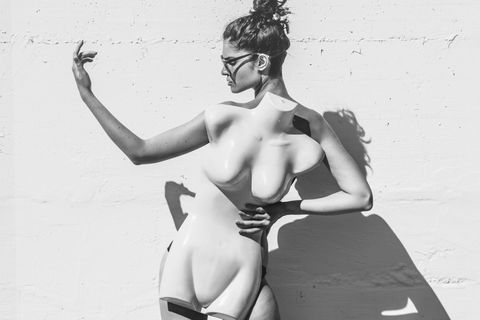 Stripping down in front of a stranger. For some, that happens after a right swipe and a couple of cocktails. For others, it's a way of life. Quite literally.

"I can't think of any other profession in which a 40-something woman can take her clothes off and be celebrated and glorified as an artistic subject," says 48-year-old figure model Claudia Hajian.

The prospect of getting naked in a classroom full of art students does seem intimidating, no matter your age—so what's it really like to be a nude figure model day in, day out? Here's what six women had to say.

A Leg Up for Rising Artists

Madeline (who requested that we omit her last name) is an actor who's wanted to model since college. Sometimes, her two occupations align. She recently played a vampire bride in a production of Dracula and brought that energy into class. "I had vampiric poses going," she says. "There was one where I crouched down and had big swooping arms that ended in claw-like hands. I did some where it was more like grabbing my neck. Lots of dramatic angles." She likes supporting other artists, the stamina she's gained, and the ability to tailor her modeling schedule to accommodate her acting.

Emma Shapiro is a visual artist whose practice explores her Jewish and Irish ancestry through her own body. Modeling has provided her the connection to herself that she needs for the work. When she started out in New York, she'd model six or seven days a week, taking about three bookings per day. Posing for individual artists and special events brought her to New Jersey and locations upstate, where she modeled in studios and outdoors. After five years, she took a model-coordinating position at a school where she scouted and scheduled models (so if you're wondering, there are management opportunities in the field). For her, modeling was "therapeutic" and helped her overcome the insecurity she'd grown up with.

Aria Chiodo, a writer, was between jobs when she saw a list on Time Out New York for new ways to make money and decided to try figure modeling. Once, she ended up helping a student from one of her classes with grammar and his resume. ("It was a little odd," she admits.) She wove her experiences into her writing, and when she shared an essay in a workshop, readers asked her if there was sexual tension in being a nude model. "There really is none," she says. "It's a very professional, normal situation that these people see nude models every day."

Mazi Wadlington came to New York to work in fashion, but the job was stodgier than she expected. "One day, my friend invited me to model at an all-day portrait class in Long Island City," she recalls of her initiation into the field. "I took a 'sick' day and it was the most fun I've had working since I moved here. I realized that if I took this seriously, I could make this my full-time job and I just went for it." Since then, she's modeled at Grand Central Atelier, New York Academy, The Art Students' League, National Academy, Florence Academy, and private artist studios. She hopes to model in Europe someday.

Similarly, Hajian left a teaching job to work somewhere where she "had no boss/administrators breathing down my neck and causing me anxiety." She'd modeled in college and enjoyed the experience. She went to the Art Students League and the National Academy, which were both hiring new models at the time. Soon, she was receiving bookings and referrals to other schools and life drawing groups.

Cornelia Graham was working in retail at old New York department store Gimbels. They folded in 1986 and she began working for a law firm. After that, she sought a job that offered more flexibility, something "a little less conventional." A former art student, she'd modeled in school to pay for supplies. Now, she's even traveled to New Mexico and Philadelphia for gigs. With a husband and two children, she's been able to raise a family in a "more or less traditional way." She's been open with her kids about her occupation. "It's not the kind of work where you age out," she says. "The artist is always finding something in the humanity of real people. There's always work for all types." Once, the actor who played Columbo on television, Peter Falk, attended one of her classes and ended up buying her a cup of coffee after an opening.

If you dream of inspiring a world-renowned sculptor, you may want to reconsider. "I end up posing for a lot of very mediocre artists," Shapiro says. "But I enjoy the work and I get paid and it's a nice experience." You may not be living lavishly in a city as expensive as New York, either. According to her, the pay ranges from around $15 to $18 per hour at schools, $20 to $25 for individual artists (with some models charging as much as $35). Los Angeles pays better, and in Belgium, models can get year-long contracts.

"Most people will think it means you're an exhibitionist or a nymphomaniac or something sexual."

Unfortunately, Shapiro finds that people sometimes misconstrue models' motivations. "Most people will think it means you're an exhibitionist or a nymphomaniac or something sexual, when the job really has nothing to do with that at all," she says. "That's what's so liberating about it." Most of the time when she tells people what she does, they think she's saying "finger model" and believe, for months, that she has another kind of job. Injuries are another concern—staying in one position for a long time stresses the body.

Unlike the fashion modeling community, figure models are diverse in age, appearance, and vocation. "You have everybody from students, actors, burlesque dancers, ballerinas, much older people who've been doing it for a long time, writers—there are a lot of people who like to sit up there and think about their writing, artists, and just characters...body builders," says Shapiro. An older male model she knows works as a professional Santa Claus during the winter. But the one thing they have in common? They're paid-for muses. And that suits them just fine.

Advertisement - Continue Reading Below
More From Culture
The Music Podcasts We Keep Pressing Play On
Why You Keep Seeing "Until Tomorrow" on Instagram
Advertisement - Continue Reading Below
The 19 Best Murder Mystery Movies
How to Join Marie Claire's Online Book Club
'In Five Years' Is MC's April Book Club Pick
'Little Fires Everywhere' Is a '90s Time Capsule
How Murtagh Dies in the Outlander Books
What Happened to John Finlay From 'Tiger King'?
'Outlander' Season 5 Is Back to the Show We Love
The Best Cooking Shows on Netflix