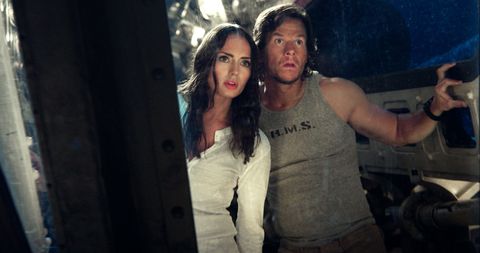 What's the deal with Shia LeBeouf? How is he involved?" I asked my boyfriend before seeing Transformers: The Last Knight.

"He hasn't been in these movies for a while."

And so with that, I spent real, American money to see the worst movie I've ever experienced in my entire life. But before I jump into the film's "plot," I should mention that the aspect ratio changes with every new camera shot. So, sometimes there's a thick black bar at the top and bottom of the screen, and then the bar is thinner, and then thick again. It's incredibly distracting, but only the fourth laziest thing about this movie.

The Last Knight begins with a battle subtitled "ENGLAND—THE DARK AGES." If you've ever taken a history class, you'll know that the Dark Ages covers a very long time period. In fact, it's possible to characterize the entire Middle Ages, from the 5th-15th Century, as the Dark Ages. The film doesn't even care when its own plot is happening, but either way, we're introduced to someone who might be King Arthur talking to his friend Lancelot while a battle rages on below involving what appear to be leftover orcs from the set of the Lord of the Rings. King Arthur assures Lancelot that his friend Merlin is coming with a weapon that will save them—and in a horrific turn, Merlin turns out to be Stanley Tucci, man who clearly does not want to be in this movie and speaks in a full-on American accent. Tucci goes to a cave, casually asks a disembodied voice for help, gets a staff that controls a giant Transformer dragon (kay, sure), and helps everyone win the battle as a result.

"I picked every single one of my cuticles. All of my fingernails are bitten to stubs. I left to go to the bathroom twice and did not miss anything."

The film then flashes to "1600 years later," which, even by the earliest dates of the Dark Ages would be the year 2076—but this movie does not give a shit. No one is going to waste a Google search on Transformers: The Last Knight, so why even bother with things like "time." At this point, we meet a group of kids in Chicago, who decide to explore a forbidden Transformer-zone of the city before being shot by police robots. Maybe this is a statement on police brutality or violence in Chicago, I think for a second, before remembering that this movie is very lazy garbage.

And speaking of garbage, good news: Mark Wahlberg shows up, rescues the kids, and goes on a road trip with one of them! And while it's not explained how he knew said kids needed saving, we do learn that he lives in a South Dakota junkyard with his Transformer friends, each of whom is a different racist stereotype.

It should be pointed out that Mark Wahlberg himself is not a cool or likable character. At one point, he calls his road trip buddy "Little J.Lo," presumably because she is of Latin descent. He also calls one of the Transformers a "skank" for some inexplicable reason. We eventually find out that he has a daughter in college, but Mark Wahlberg does not care about things like daughters in college, because he fucks right out of South Dakota to meet Anthony Hopkins in England for some urgent Transformer business. Starting here, a second, equally terrible movie begins, which takes place in the U.K. and opens with a stereotypical "hot girl" playing polo. Even though she looks like Megan Fox, she is not Megan Fox because she's British. After her polo match, one of the other players loudly yells something at her so the audience knows she is single. "I'm late!" she cries, and heads to her job as a professor at Oxford—where she works in the famous Oxford Museum with Dinosaur Bones and Also King Arthur Paintings. She says something of the effect of "King Arthur is just a myth, and dragons aren't real," so the audience remembers that this movie had something to do with King Arthur.

Like Mark Wahlberg, British Megan Fox also gets summoned to Anthony Hopkins' house, opting to wear a very tight "going out dress" even though it's the afternoon. Mark Wahlberg calls it a "hooker dress" because he's awful, and the two of them fall in love. But not before Anthony Hopkins lets them in on a secret: throughout history, a group of people have been protecting the legend of King Arthur and the Transformers. This group of protectors included notable figures such as Winston Churchill and Harriet Tubman, which raises many questions as to why Harriet Tubman never used her Transformers to help free slaves. Also, British Megan Fox is the last living decedent of Merlin! But honestly, the plot does not make sense, and it is a waste of energy to attempt to understand it, so let's revert to list format for a few other key moments:

Okay, cool, back to Mark Wahlberg, who steals a submarine with the help of Anthony Hopkins, and then heads to the ocean with British Megan Fox—whose clothes change mid-scene from a blouse to a low-cut deep V. They arrive at a sunken Transformer space ship, where, for some reason, Merlin is buried. British Megan Fox ends up activating his staff, which wakes up a bunch of Transformer knights, and then "Nemesis Prime" shows up and Mark Wahlberg has to remind him that he's actually good not evil. But it doesn't really matter, because a different evil Transformer appears, steals Merlin's staff, and brings it to a disembodied floating head on the Transformer planet. At least, that's what Wikipedia says happens, because two hours into the movie I followed the lead of the other people in my row, and left the theater.

Footage of me watching this movie.

This is because Transformers: The Last Knight is pretty much crap, but not even good, fun, entertaining crap. It commits the cardinal sin of a popcorn action movie: it's boring. This movie is so, so boring—which seems impossible given all of the random plot devices and action scenes. I picked every single one of my cuticles. All of my fingernails are bitten to stubs. I left to go to the bathroom twice and did not miss anything. This movie is literally two and a half hours. That is way too long.

I can only pray that Stanley Tucci and John Turturro didn't have to sit through the premiere. I hope British Megan Fox takes roles where she doesn't have to be a professor (with three PhDs, they say!) who has to flirt with Mark Wahlberg and nothing else. But most of all, I hope that they never make any more of these movies.