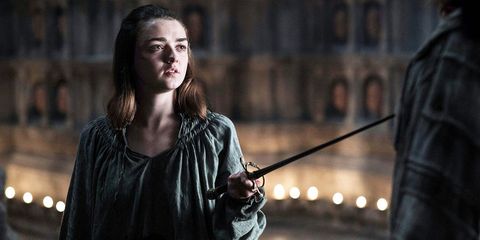 I can relate to Arya Stark. Not in the borderline-sociopathic murderer way, but in the wanting to want something your heart doesn't really want way. In that way, I suspect, a lot of people can relate to the Most-Likely-to-Stab-You-in-the-Neck Stark.

For those of us in the real world, the things we want to want range from totally innocuous to ostensibly "good"—promotions at jobs that aren't really our dream, or a significant other when we're actually totally fine being single. These are our "shoulds"—the things we feel pressured to desire by society, by our friends and family, and sometimes even by ourselves. For Arya, that "should" takes the form of an ominous black and white door leading to a hall of faces.

So, here's my thesis: Arya Stark never really wanted to be a Faceless Man. She wanted, very badly, to want to be a Faceless Man—and those are not the same thing. The show made this abundantly clear the moment Arya hid Needle after being instructed to get rid of everything that tied her to her identity.

To understand why Arya ultimately abandoned her "should" (which, SPOILER ALERT, she epically did at the end of Season 6, killing the Waif and returning to Westeros to take revenge on Walder Frey for slaughtering her mother and brother at the Red Wedding), we need to dig into the psychology of "shoulds"—and why we should all take a page from this little sociopath's handbook (but, to be clear, not in the murdering, throat-stabbing way).

Dr. Karissa Thacker, a workplace psychologist and author of The Art of Authenticity: Tools to Become an Effective Leader and Your Best Self, explains that self-monitoring is one of the biggest factors in how we respond to societal shoulds. Essentially, there are two kinds of people in the world—people who are high in self-monitoring and people who are low in self-monitoring. It's not black and white—we all exist somewhere along the spectrum—but in general, most people will tend toward one or the other. 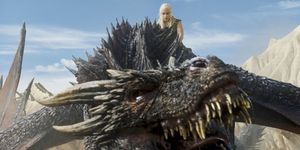 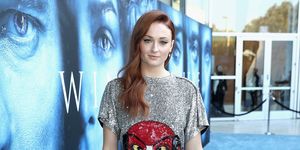 Arya Stark is definitely low in self-monitoring. We've seen that since the pilot. Even though society and her family expect her to be a "lady," Arya marches to her own beat. She's unapologetically disinterested in needlework and already skilled at archery. She would rather learn sword fighting than sewing. She knows what people want her to be and she just doesn't care.

Sansa, on the other hand, is so high in self-monitoring that she manages to maintain the charade that she loves and is loyal to King Joffrey even after he has her publicly beaten. Sansa knows there is one way she is expected to act and that her survival hinges on meeting that expectation outwardly, no matter what she's feeling inside.

It's a good thing Arya was taken out of King's Landing immediately after Ned Stark's death, because she wouldn't have lasted long. She would have spat in Joffrey's face, or tried to murder him in the Throne Room. She would have acted on her feelings without a second thought. Arya manages to self-monitor in especially dire situations—when she's pretending to be a boy on her way to The Wall and when she's briefly employed as Tywin Lannister's cup bearer—but even then, not particularly well (Gendry discovers she's a girl and Tywin catches several clues that she's not the low-born girl she's pretending to be). She continues to self-monitor at a minimal level throughout her journey with the Hound, repeatedly telling him that he's on her kill list. When they finally part ways and she begins her journey to Bravos, it looks like she's turning over a new leaf. Arya joins an organization—the Faceless Men at the House of Black and White—and tries to conform to its rules.

Except, as much as Arya wants to want the life of a Faceless Man, it's the idea of being a Faceless Man that she's enamored with, not the actual lifestyle (and who hasn't been there, projecting too much onto a "dream job"?). She doesn't want to answer to the Many-Faced God. She wants to answer to her own moral compass. She uses her newfound face-changing power to take out Ser Meryn Trant, who killed her fencing instructor Syrio Forel—even though the Many-Faced God didn't ask for his death. Because Arya is in a complex organization though, this doesn't go over well. She's punished (with the loss of her eyesight) and forced to learn a degree of self-monitoring in order to get back up (and, you know, get to see again).

In Season 6, when Arya's assigned to assassinate the actress Lady Crane, she bonds with her and saves her life at the last moment—effectively tendering her resignation from the Faceless Men. Arya wasn't the right person for Jaqen H'ghar to groom to become a managing partner in the House of Black and White. She's more the self-employed type. That's why her decision to abandon the Faceless Men at the end of Season 6 isn't surprising at all. But her time with them wasn't a waste—in addition to some very handy new magic assassin skills, Arya also learned a little balance. She learned when to self-monitor and when to trust her gut and go off on her own, which is exactly what we should all be aiming for.

"The art of being human and being an authentic human is to be cognizant of the social cues and the shoulds and the people around you, but to also be cognizant of what's going on inside of you because both are important," Thacker says.

The key to balancing those is reformulating how you identify yourself, according to Dr. Tami West, author of The Stress Club: Stop Participating, Take Your Power Back, and Start Living Your Own Life. "We have to start with an actual identity reformulation for ourselves, which means just with us, just by ourselves, not with anyone else because identity is on many levels, who we are. Things like 'female,' 'daughter,' 'mother'—whatever it is, those specific words. And then identity is also who you want to be, words that you would use to describe yourself—'successful,' 'happy,' 'confident.'"

In other words, focusing on the words that identify the kind of person we want to be (as opposed to labels that carry a lot of expectations) helps us move toward what we actually want—whether that's giving up your corporate gig to go to art school or quitting your magic assassin band to avenge your medieval family's deaths solo. Which is exactly what we should expect from Arya this coming season on Game of Thrones.