There are times when Valerian and the City of a Thousand Planets—the latest sci-fi ejaculate from The Fifth Element's Luc Besson—feels more like a video game than a movie. We follow military officer Valerian and his partner Laureline from CGI set-piece to CGI set-piece as they engage in a top-secret mission to retrieve a stolen artifact and investigate the mysterious radioactive zone in the center of a massive space station. Because sure! It doesn't help that the dialogue is cut-scene quality at best, and that the two lead actors—Dane DeHaan and Cara Delevingne—share similar child-like attractive/symmetrical faces that could have easily been artificially rendered.

This is not to say that Valerian and the City of a Thousand Planets is bad. I mean, it isn't good. But I can imagine it becoming something of a cult-classic, celebrated for its expansive world, campy acting, and spectacular CGI. The opening sequence—depicting the evolution of the space station, set to David Bowie's "Space Oddity"—is perhaps one of the best first minutes of storytelling in a film since Up. Unfortunately, the movie that followed is a series of clichés and lazy storytelling, with dialogue that ranges from unintentionally hilarious to "like a movie they'd play on those screens while you're waiting in line for a Disney ride in Tomorrowland."

Dane DeHaan and Cara Delevigne have so little chemistry, it somehow makes me want to have sex with them less.

This is like a magic trick. These are two incredibly attractive people, people who by all accounts are engaging and sexually active, and yet they manage to come across as co-workers in an accounting firm run entirely by sexless androids.

Nothing makes sense about their characters.

When we meet Valerian and Laureline, they are ostensibly doing what some humans might call "flirting" while on a virtual reality beach. Valerian continually propositions his partner and Laureline rejects him because he's a "player." They seem to be pushing a narrative in which Laureline is the straight-laced, follow-the-rules old-school romantic and Valerian is the renegade space-cowboy. And yet, in the climax of the film, Valerian delivers the following line with a straight face: "I'm a soldier. I follow the rules." The audience of the screening I attended burst out into snickers. Not only was it the lamest line ever delivered, but it was also totally counter to everything they'd been trying to get us to believe about our protagonist.

A shot from the film
STX Entertainment

Of the 3 female characters, every single one appears, at one point or more, in a bikini.

Laureline wears two different bikinis for her first two scenes. Because why stop at one? Meanwhile, the blue alien princess appears only in a tiny shrug that threatens to expose her underboob every time she lifts her arms (which she does often); and, because Rihanna plays a sexy stripper named Bubble, she spends her six minutes on screen in several sexy stripper outfits.

Every female character's dialogue feels as though it was written by a man whose only exposure to women is through sassy CVS greeting cards.

"He ripped my dress!" Laureline huffs after completing a top secret mission and escaping from the grasps of an enemy dragon beast. Later in the film, while examining top-secret cargo that's capable of duplicating any material it consumes, Laureline smiles down as it spits out globs of silver: "I need to take you shopping." Rihanna also gets in on the cliché bon mot game: she plays a shapeshifter who transforms into an ugly alien creature to help Valerian, and quips "I need a manicure" when she sees her alien hands. :|

*SPOILER* Rihanna Dies in the Most Eye-Roll Inducing Way

Despite certainly being the best actor there, Rihanna's character, sex-worker/shapeshifter Bubble, dies randomly and meaninglessly—but not before spending her last breath teaching our white male protagonist how to love. The dead sex worker trope is incredibly annoying, and so is the sex-worker-with-a-heart-of-gold-who's-only-there-to-help-the-hero-learn-something trope. Just bad all around. 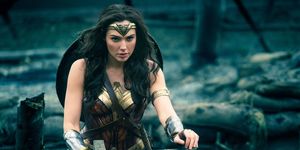 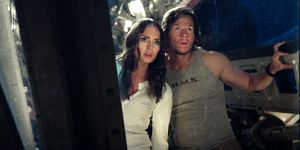 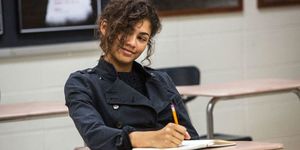 Our white hero saves an alien race of lanky, vaguely-tribal-attired blue creatures from genocide by the evil American military.

They're portrayed as "primitive," but much more wholesome than humans—living in a beach paradise and connected to the earth, with no sophisticated technology or industry. Hi, ambiguous racism! Also, in case you were still feeling White Guilt, the blue tribal creatures say multiple times that they forgive us. We're forgiven!

This movie is Avatar.

They are the same movie. Though, honestly I liked this better than Avatar, probably because it's shorter. But if we're talking ancient, mysterious water-associated lanky glowing blue creatures, honestly I'd rather just watch Atlantis: The Lost Empire.

Cara Delevingne doesn't get to rescue herself....

Because apparently she needs to be rescued by our strong, brave male hero while she's a damsel in distress forced to wear a wedding dress and offer food to a grotesque foreign alien emperor. "But Dana!" the men on my Twitter are already frantically typing, "Laureline had to rescue Valerian before, from his plane crash!" First of all, no. Laureline did not have to rescue Valerian—she had to find Valerian because he, the brave hero, went off in pursuit without her. And she "rescues" him from a manly plane crash. He is never a captive, or a slave, or in any position that emasculates or otherwise indicates any possible position of submission.

He is Han in carbonite; she is Leia in a gold bikini.