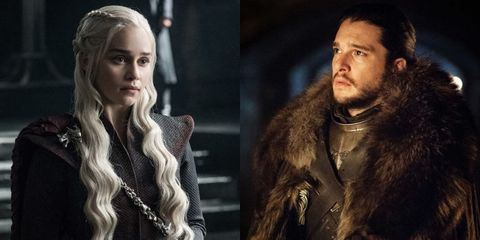 Rarely (/never?) does a show wait seven years to have its stars act in a scene together, but Game of Thrones has done exactly that. Jon Snow and Daenerys Targaryen, arguably two of the most important characters in the large ensemble cast, have never shared the screen—but that is finally about to change.

In last night's episode, "Stormborn," Jon decided to accept Dany's invitation to meet her at Dragonstone, the ancestral home of her family (and his family—he just doesn't know it yet), the Targaryens. Why? Because Dragonstone is built on a massive pile of dragonglass–one of the few things known to kill White Walkers. Also, Dany has three dragons, which breathe fire—another thing that will be useful in the impending war against the dead.

And it looks like we won't have to wait all season for Jon to make it to Dragonstone. The preview for next week's episode teases the meeting we've all waited so, so long for.

It's especially significant since many fans think that Jon and Dany are destined to rule the Seven Kingdoms together (the book series on which Game of Thrones is based is called A Song of Ice and Fire and many believe Jon and Dany are the titular "ice" and "fire").

We honestly have no idea what to expect from the weirdest secret family reunion in Westeros. Love at first sight (marrying family members is something the Targaryens are known for)? Jon Snow taken prisoner? Jon Snow riding a dragon? Literally anything could happen.

Kayleigh Roberts Kayleigh Roberts is the weekend editor at Marie Claire, covering celebrity and entertainment news, from actual royals like Kate Middleton and Meghan Markle to Hollywood royalty, like Katie Holmes and Chrissy Teigen.
This content is created and maintained by a third party, and imported onto this page to help users provide their email addresses. You may be able to find more information about this and similar content at piano.io
Advertisement - Continue Reading Below
More From Culture
The Sexiest New Movies of the Year
A Look Back at Princess Anne's Life in Photos
Advertisement - Continue Reading Below
Where Is the Cast of 'Gilmore Girls' Now?
'The Bachelor' Is Back!
Who Is "Queen" Victoria on 'The Bachelor'?
Matt James' 'Bachelor' Cast: Everything We Know
Get to Know Serena Pitt From 'The Bachelor'
The Best Lesbian Movies Streaming on Netflix
Listen to the Best New Love Songs of 2021 (So Far)
Who Is Christine Chiu on Netflix's 'Bling Empire'?