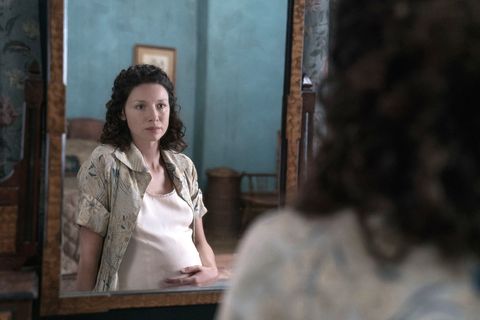 Hear that? It's the sound of dehydrated fans the world over on the verge of death due to a horrifying droughtlander. But the metaphorical monsoons have come and your thirst is about to be quenched. Also, in regards to that extremely elaborate metaphor, YOU'RE WELCOME.

Anyway, the point is that Outlander hasn't been on for literally months, but the show's triumphant Season 3 return was well worth the wait and we're breaking down all the most important moments. Also, there is no sex in this episode, and because we understand how upsetting that is, here's a sensual GIF to hold you over:

Claire Misses Jamie So Much It's Literally Painful

Sorry, the old Claire can't come to the phone right now. Why? Because she's dead. Please allow us to introduce you to Boston Claire—a strong-willed feminist badass who is a f*cking inspiration due to how little shit she takes, but who also happens to be in a loveless marriage. Because, while yeah—her original husband Frank is great, he also looks exactly like his serial rapist ancestor Jack Black Randall, which is super 👀 . And poor Frank: Lord knows he's trying to be a good husband, with his weird dad jokes, insistence on wearing fedoras, and attempt to disguise his hurt feelings when Claire refuses to let him touch her. But she's just not that into him.

Anyway, back to Claire. When we find Outlander's leading lady, she's easing into her life in Boston, and going about her pregnancy as best she can considering her baby's father is a casual 18th century highlander (totally normal!). She's also trying her best to be a dutiful wife—making Frank dinner, and chilling with his chauvinistic boss who thinks women shouldn't have opinions. But to be honest, most of this episode hones in on the strained relationship between Frank and Claire, and exhibits spectacular acting on both their parts. When Frank tells her "I'm not the one who's been f*cking other people" and they get into a screaming fight? Full body shivers.

Jamie Is So Bummed He'd Rather Die Than Live Without Claire

Guys, we're so worried about Jamie. The good news is he survives the Battle of Culloden, and kills his arch nemesis Jack Randall in an epic and beautifully lit battle that lends an element of closure to their disturbing relationship. The bad news is that Jamie spends about fifteen minutes in a pile of dead bodies and starts hallucinating images of Claire before someone bothers to find him. So like, good times.

He then skulks his way around an abandoned house filled with ennui, and is literally *this* close to being like "JUST LEAVE ME HERE TO DIE" before English officers roll up all "LOL, perfect we're going to kill you anyway."

But fear not, Jamie once again evades death thanks to an officer who happens to be the brother of that little kid whose life Jamie spared. Said officer feels a moral obligation to be merciful, so he does what any dude in an awkward position would do—shoves Jamie into a cart full of hay and is like "boy, bye." He eventually makes his way back to Lallybroch, where he reunites with his sister and her family, so at least that's something.

But guys, it has to be emphasized that poor Jamie is traumatized because his wife is a time-traveling nurse who just passed through some enchanted rocks to the future, and life is really confusing. His kilt has never been more limp and lifeless. It is a true metaphor for his spirit.

^ That awkward moment when your time-traveling wife just had a baby with a dude from the 18th century.

Claire is officially a mom to sweet baby Brianna, who—thanks to the flash-forwards in last season—we know grows up to be an extremely inquisitive young girl who helps discover that Jamie survived the battle. Claire's labor scene is a call back of her first disastrous delivery (she wakes up screaming "where is my baby?") but both she and Frank seem pretty happy the moment Brianna makes her debut—they even share an emotional bout of tears, and Frank promises her "we're going to be alright." Frank even forgives Claire for not telling him about her miscarriage, and doesn't seem phased when she doesn't return his "I love you." So, is this the beginning of a true happy marriage for them? We would say yes, but a random nurse comes over and ruins everyone's vibe by being all, "where'd she get the red hair?" so THANKS FOR NOTHING, NURSE.

Also notable, Frank writes to his Reverend buddy in Scotland right before Brianna's birth and asks for info on Jamie, so drama is *definitely* coming....