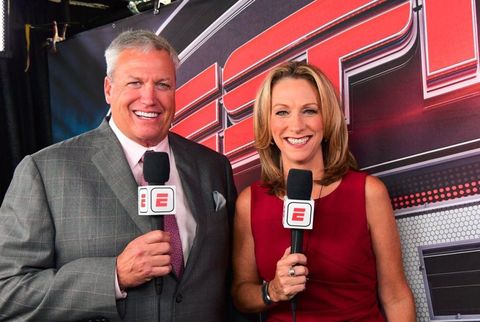 It's hard to believe, but it took until 2017 for a woman to announce a Monday Night Football game. Beth Mowins, a broadcaster best known until now for calling college football games, announced during Monday nights' Chargers-Broncos game. It was the first time in 30 years a woman called play-by-play for an NFL game, and the first time a woman did so during ESPN's Monday Night Football broadcast. And though lots of fans expressed their support, because the Internet is still the Internet, she was also met with a ton of sexist backlash.

Congrats to @bethmowins, set to become the first female to call an NFL game since 1987 pic.twitter.com/FeLk3iqvu8

Here's a short clip of her calling the game:

Mowins even had groundbreaking women in the industry congratulate her in an ad from Secret and the NFL.

Congratulations, @BethMowins! We're so proud to support you as the first woman to announce a Monday Night Football game. pic.twitter.com/ucj2OOZ3N0

But despite her historic moment, some viewers just couldn't get it through their minds that a woman—gasp!—was talking to them about sports. People criticized her voice, how long she spoke, and sometimes, just the fact that she is a woman daring to talk football.

Female broadcaster in the booth is like getting served Diet Coke when you asked for regular Coke ... it's not the same #MondayNightFootball

ENOUGH WITH THE WHOLE FEMALE ANNOUNCER EXPERIMENT IN SPORTS.. IT DOESN'T FUCKING WORK!!

Hopefully, Mowins ignores tweets like these and instead focuses on ones like these, which show an outpouring of support from both men and women who thought it was about time a woman took the mic during a game like this.

earnest tweet alert: been watching the NFL since I was a little girl, and seeing @bethmowins up there makes my heart sing

I love tv. I love making tv. I could never do what @bethmowins is doing tonight. pic.twitter.com/IgRNDbrcLB

Beth Mowins welcoming us to the game & I just got chills. pic.twitter.com/aPZbmjj6H5

And even before the game started, she was inspiring the next generation of sportscasters. That's the spirit we all could use.

Avery's got next #MNF pic.twitter.com/6TMyng6r9W